Protecting Dreamers through the courts 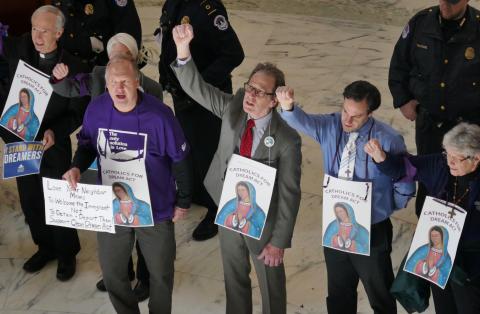 The Maryknoll Office for Global Concerns joined the legal effort to keep the Deferred Action for Childhood Arrival (DACA) program alive by writing about the lived experiences of Maryknoll missioners in an amicus brief supporting a case on behalf of 42,000 DACA recipients in the state of New York. The following article was published in the March-April 2018 issue of NewsNotes.

While some 700,000 Dreamers face uncertainty and the possibility of deportation, recent rulings in federal court emit a ray of hope that their cause is not lost.

These undocumented immigrants, brought to the U.S. as children, have been shielded from deportation and other immigration enforcement under the Obama-era program known as DACA, for Deferred Action for Childhood Arrivals. That changed on September 5 of last year, when the Trump administration ordered the program to shut down by March 5 unless Congress came up with a fix. Paralyzed by a wave of creative advocacy by Dreamers and their supporters on one side and by a wall of entrenched immigration views and open racism on the other, Congress has failed to act.

But now two federal courts have lent moral weight to the Dreamers’ side. On February 13 a federal judge in Brooklyn followed a California court issuing a preliminary injunction against the DACA recension, giving Congress more to consider over the next two weeks. On February 28 the Supreme Court ruled that it would not entertain an appeal by the Trump administration to block the injunctions, requiring the Trump administration to keep major parts of the DACA program in place while legal challenges against the recension of DACA proceed.

In its injunction, the Eastern District of New York (EDNY), representing some 42,000 DACA recipients, Judge Nicholas G. Garaufis found that a 17-state and immigrant-advocacy coalition suing over the DACA decision likely to prove the “arbitrary and capricious” nature of the September 5 order to end DACA. The EDNY asked advocacy and religious groups, including the Maryknoll Office for Global Concerns, to write amicus briefs for the case to support the “capricious and arbitrary” basis for the decision and help illustrate what was at stake Dreamers and their families.

Read our statement "Maryknoll Missioners stand with immigrants from Haiti, El Salvador and Africa," in response to  vulgar remarks by President Donald Trump in meetings with legislators on January 11 in which he apparently described Haiti, El Salvador and countries in Africa as “shithole countries.” Maryknoll unequivocally condemns these shameful statements. To characterize in this way whole countries – whose peoples are largely nonwhite – can only be understood as bigoted and racist.

For its part in the amicus brief, the Maryknoll Office for Global Concerns wrote:

"Having lived and worked with families in extreme poverty for many years in countries around the world, Maryknoll Fathers and Brothers, Sisters, and Lay Missioners have acquired a deep understanding of the dire social, economic and environmental conditions that Dreamers would face if they were deported, as well as intimate witness to the fragility and insecurity of living in the shadows without documents in the U.S. Deporting Dreamers to their countries of origin, where most have only weak or distant ties, would subject them to the same forces of poverty, violence, and instability their families originally fled and from which millions more still flee. In Haiti, for example, Maryknoll Sisters have witnessed the bare struggle for post-disaster survival in the massive slums of Cite Soleil, where they help residents subsist from gardens grown in discarded tires on turf fought over by rival gangs. In El Salvador, one Maryknoll Lay Missioner describes the anger and pain that pervades communities preyed upon by powerful gangs, where immediate survival forces youth to face grim choices between lives of drugs and guns – or escape. And in Guatemala, a Maryknoll Father reports on the rising rates of femicide and sums up what motivates millions of rural migrants in a single word: 'desperation.' Maryknoll Missioners working in migrant shelters along the U.S.-Mexico border also hear daily stories of desperation from the countries many Dreamers might be returned. Poverty, starvation, extortion, sexual assault, gang violence, and political oppression are among the conditions cited as triggers to leave. In one such encounter in Nogales, Sonora, a man travelling north with his son from Honduras merely pointed south and said, 'There is no life there anymore.'"

While the government does not have to consider new applications under the EDNY ruling, the Department of Homeland Security can judge DACA renewal requests on merits and case-by-case but must otherwise continue the program “on the same terms and conditions that existed prior” to the September 5 DACA recension.