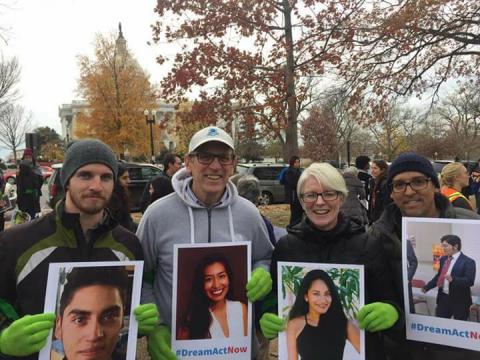 The Maryknoll Office for Global Concerns issued the following statement on January 16, 2018.

The Maryknoll Office for Global Concerns is deeply disturbed by vulgar remarks by President Trump in meetings with legislators on January 11 in which he apparently described Haiti, El Salvador and countries in Africa as “shithole countries.” Maryknoll unequivocally condemns these shameful statements. To characterize in this way whole countries – whose peoples are largely nonwhite – can only be understood as bigoted and racist.  President Trump’s stated preference for immigrants from nations such as Norway, and his failure to unequivocally denounce the racist and anti-Semitic actions of white supremacists in Charlottesville, reveal an abhorrent racism that must be loudly condemned by all people of faith.  As Dr. King, whose dream and life commitment we celebrate this week, said:  “A time comes when silence is betrayal.”

Such shameful remarks are not only vulgar, they validate and encourage racism, hate, and xenophobia with dangerous consequences for immigrants and people of color, disrupting and even threatening the lives of hardworking and dignified peoples here and abroad.

Maryknoll Sisters, Brothers, Fathers and Lay Missioners have been privileged to live and work for many years with the people of Haiti, El Salvador and many African countries that President Trump has vilified. We are deeply offended by his vulgar characterization of these peoples who have welcomed Maryknoll Missioners into their communities, and whose faith and cultures have taught us so much about solidarity, compassion, and Gospel nonviolence. Those who are immigrants to the United States bless us with their tremendous skills, hard work, and dedication to community.

We stand in solidarity with the people of Haiti, El Salvador, and Africa, and welcome those who immigrate to the United States.  The Maryknoll Office for Global Concerns has supported the Deferred Action for Childhood Arrivals (DACA), condemned the ending of Temporary Protected Status (TPS) for Haitians and Salvadorans, and called for comprehensive immigration reform.

Maryknoll Missioners are deeply concerned that the policies and statements of the Trump Administration are fostering racism and hate in our society.  We call on our political leaders, U.S. citizens and all people of faith to speak out against such racist comments as well as the anti-immigrant policies of the Trump administration that demean our great, diverse nation.

Photo from left to right: Kevin Carroll, Gerry Lee, Susan Gunn, and Darrin Mortenson of the Maryknoll Office for Global Concerns participating in the "Defend Our Immigrant Communities" march and rally at the U.S. Capitol Building in Washington, D.C. on December 6, 2017.