Catholic Day of Action with Dreamers 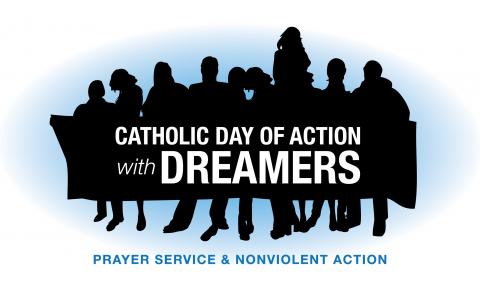 In response to requests from Dreamers for a demonstration of additional support from Catholic leaders, a group of Catholic social justice organizations with offices in Washington, D.C. organized and led a Catholic Day of Action with Dreamers at the U.S. Capitol on Tuesday, February 27, 2018.

More than 100 people gathered at the U.S. Capitol to pray and listen to testimony from Dreamers, our young, brave immigrant brothers and sisters who will be vulnerable to deportation if Congress does not pass legislation by March 5 when the Deferrred Action for Childhood Arrivals (DACA) program is scheduled to end. Forty-two people - many of them young and old Cathoic Sisters, Priests, and Lay people – commited an act of nonviolence civil disobedience by continuing to pray the rosary and sing in the Rotunda of the Russell Senate Building :

To prepare for an act of nonviolent civil disobedience during the prayer vigil, members of the above named Catholic organizations have gathered in recent days to pray the following prayer:

God, as we prepare our minds and hearts to engage in nonviolent civil disobedience, we remember the Hebrew midwives who disobeyed Pharaoh’s orders and thus saved the life of Moses.  We remember Jesus, who was criticized for healing on the Sabbath, who allowed his disciples to pick grain on the Sabbath when they were hungry, who always placed Your law of compassionate love above human laws.  We remember the long line of women and men who sat down, crossed lines, broke in—participating in acts of civil disobedience which were acts of gospel obedience.

May our nonviolent resistance bring attention not to ourselves but to the young immigrant Dreamers on whose behalf we are willing to be arrested.  We pray for these thousands of Dreamers and their families.  We pray for legislators who hold the fate of Dreamers in their hands.  We pray for ourselves, that we act with freedom, courage, humility and compassionate love.   Amen.

We invite all people of faith to join us in prayer and action for Dreamers and their families.

“We ask that all people of faith join us in prayer and action for Dreamers and their families,” said Gerry Lee, Director, Maryknoll Office for Global Concerns.

“We are grateful for the words of support from Catholic Bishops around the country,” Lee said, “and we remember the words of Bishop Robert W. McElroy of San Diego from almost exactly one year ago when he spoke at the first U.S. regional World Meeting of Popular Movements in Modesto, California. Bishop McElroy called for the Church to ‘disrupt’ and ‘rebuild.’”

“But we, as people of faith, as disciples of Jesus Christ, as children of Abraham, as followers of the Prophet Muhammad, as people of all faiths and no faith, we cannot merely be disruptors, we also have to be rebuilders. “We have to rebuild this nation so that we place at its heart the service to the dignity of the human person and assert what the American flag behinds us asserts is our heritage: Every man, woman and child is equal in this nation and called to be equal.”

"Remembering Bishop McElroy's words," Lee said, "the Maryknoll Office for Global Concerns joins the Catholic Day of Action with Dreamers as a means of disrupting injustice and rebuilding a peaceful society that is welcoming to our immigrant brothers and sisters.”

"Standing together yesterday with Dreamers and Catholic Sisters, Priests, Brothers, and Lay people, both young and old and of every race, we solidified even further our solidarity with Dreamers and with all our immigrant brothers and sisters. We don’t know what will happen to the Dreamers – well-over 700,000 brave young people brought to the United States as children – if Congress does not take action before March 5, if the Deferred Action for Childhood Arrivals (DACA) program is allowed to end and Dreamers are left vulnerable to deportation. But we do know that we are one body in Christ. To Dreamers, we say, you are Jesus in the here and now. We stand with you, your families, and all those who migrate in search of a safe home."

Read more of the statement from Gerry Lee and see photos here...

Why protection for Dreamers is needed by March 5 2018

Prayer for Migrants and Refugees

Why MOGC joined Catholic Day of Action with Dreamers