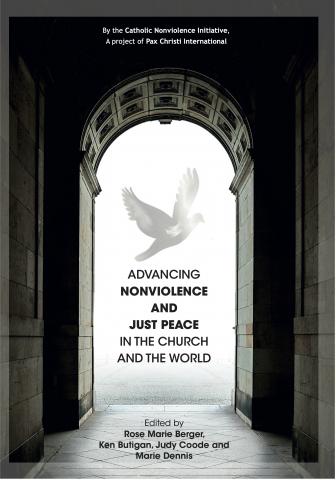 New book highlights women leaders who advance the practice of nonviolence by pursuing open and sincere dialogue. This article was published in the January-February 2021 issue of NewsNotes.

The Catholic Nonviolence Initiative (CNI), a project of Pax Christi International that began with a conference at the Vatican in 2016, continues its work promoting Catholic understanding of and commitment to Gospel nonviolence with a new book, Advancing Nonviolence and Just Peace in the Church and the World. The fruit of a global, participatory process culminating in a second Vatican conference in 2019, the book includes “biblical, theological, ethical, pastoral and strategic resources, presented to serve as a contribution to Catholic teaching on nonviolence.”

The authors of the new volume – peace practitioners, theologians, and social scientists from 39 countries around the world – describe nonviolence as a spiritual orientation, a way of life, and a practical tool. Presented as “the foundational, universal ethic for building a culture of peace, disarmament and development,” nonviolence has deep roots in scripture and spirituality.

But the CNI also illustrates the practical ways nonviolence is successfully employed to reduce, resist, and transform both direct, physical violence and systemic, institutional violence and injustice.

Pope Francis and his predecessors have repeatedly called for the faithful to pursue “forgiveness, dialogue, and reconciliation” as alternatives to violent conflict. But to critics, such concepts sound lofty and impractical in the face of real, intractable violence. The CNI offers a concrete counternarrative.

Dialogue may refer to high-level negotiations between political elites – the kind of talks diplomats and mediators have facilitated between warring parties from Northern Ireland to Afghanistan. But other forms of dialogue – at the middle- and grassroots levels, and often led by women – pave the way for such high-level negotiations.

In Mindanao, Philippines, violence between Muslim Moro rebels and the government grabs headlines worldwide. But for local peace activist Myla Leguro with Catholic Relief Services, the picture is more complicated: questions of identity, colonialism, extractivism, human rights, and autonomy are all closely tied to disputes over land.

Leguro developed “the Three B’s,” of dialogue to prepare individuals (“binding” with healing and education) and whole communities (“bonding” by expressing inclusive visions for the future) for negotiations between conflicting groups (“bridging”) to settle land issues. The three-stage process builds skills, trust, and agreements that serve as a basis for addressing wider conflicts. Leguro’s

Three B’s have been adopted in conflict zones around the world, including central Africa, where other local leaders have further developed her model.

In northern Kenya, Pax Christi peacebuilder Elizabeth Kanini Kimau facilitated dialogue amid “disorganized, armed, communal violence” between warring pastoralist communities – “a situation vulnerable to political manipulation by armed militias.” Understanding the respect afforded elders, she invited elders from all sides to a neutral location, where they could dialogue safely. The elders recruited warriors to follow suit, and the warriors invited youth. The elders have now established ongoing dialogue to resolve conflicts before they erupt into violence.

While Leguro and Kimau bring a local expertise to peacebuilding, other times third parties from outside a conflict zone play a crucial role.

In Syrian refugee camps in Lebanon, Sara Ionovitz with Operazione Colomba (Operation Dove), describes how ordinary Syrians came up with a plan for the creation of safe zones that allow them to return to their country, but because they were not armed actors in the conflict, they were not included in peace talks.

Operation Dove’s volunteers facilitated conversation between the Syrians and European Union leadership. "We needed schemes of listening that were outside the frames we already knew,” explains Ionovitz. “Mediation is made by dialogue, starting from the ground to the top, to governments. [We are] just the microphone: we go to the Italian government, which possibly talks to the Lebanese or German government or institutions. It’s a popular democratic diplomacy.”

Inside the camps, the presence of the international nonviolence organization was a deterrent to violent attacks on the refugees. Ionovitz and her colleagues were able to reach out to surrounding communities, building “bridges of dialogue between the local Lebanese host population, who are scared and sometimes hostile, and the Syrians themselves.”

Women at the fore

Too often in the Church and in documents on Church teaching, the indispensable, transformative leadership of women is erased and ignored. Advancing Nonviolence offers a refreshing corrective, highlighting the voices and leadership of women throughout.

A book on nonviolence could hardly do otherwise, as study after study demonstrates that sustaining peace is only possible when women are fully included. The integral inclusion of women is one of the many ways the Catholic Nonviolence Initiative is pointing the way forward for the Church and the world.

Advancing Nonviolence and Just Peace in the Church and the World, Berger, R.M., Butigan, K., Coode, J., and Dennis, M. (Eds.) is available in the U.S. from Winchester Book Gallery: http://bit.ly/3ohtBoD