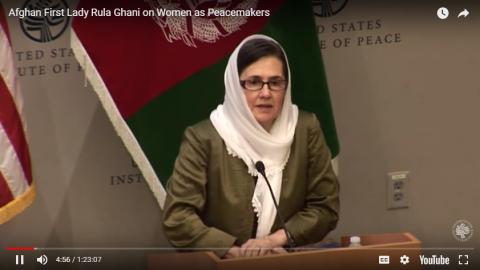 Women are the largest group to be affected by violent conflict and yet often have the least participation in its resolution. At the same time, research shows that women are essential to the success of any peace process. The following article was published in the November-December 2017 issue of NewsNotes.

President Trump recently signed into law the Women, Peace, and Security Act of 2017, a bill with bipartisan support that aims to strengthen, support, and promote the role of women in peace talks and post-war stability. There is strong evidence to support this. A 2015 study of 156 peace agreements concluded when women are part of the discussions to end violent conflict, wars are more likely to stay ended and to bring a just peace that includes all the population.

Afghanistan’s first lady, Rula Ghani, spoke at an event at the United States Institute for Peace (USIP) in Washington, D.C. on October 25 about the role of women in peacemaking in Afghanistan. Since her husband, Ashraf Ghani, became president in 2014, Rula Ghani has quickly gained a reputation as a strong advocate of both the peace process in Afghanistan and the inclusion of women on all levels of Afghan society.

Rula Ghani, who was raised in Lebanon to a Christian family and attended university in France and Lebanon, spoke about a conference for women in Kabul that she helped coordinate in 2016. The “Third Symposium on Afghan Women’s Empowerment” brought more than 300 women from across the country to the presidential palace to discuss issues affecting Afghan women. Ghani described these women, who were of varying levels of education and experience, as ready and willing to share their struggles and lead in finding peaceful solutions.

Taliban control of certain areas of Afghanistan hinders access to health care, education, and economic activity, especially for and by women. While the government and the Taliban are at an impasse, many women are engaging in negotiations with the Taliban at the local level. Some individual women have successfully convinced Taliban members to abandon checkpoints that hinder movement and to allow their children to go to school. The conference in 2016 provided Afghan women the opportunity to examine their strengths in nonviolent peacebuilding and brainstorm ways to organize their efforts and increase their influence.

For Ghani, the key to peace in Afghanistan is a culture shift for a people who have lived with violence and uncertainty  for over forty years.

“Social peace” can come, Ghani said, when “mentality shifts from a mode of violence and open confrontation to that of peaceful interaction.” Ghani said she will continue to highlight women already engaged peacebuilding and empower them to hone their skills for the benefit of society at large, and promote the inclusion of more women in government, in peace talks, in education, and in business.

The Catholic Nonviolence Initiative (CNI) has similar aims – to lift up examples of nonviolence peacebuilding around the world, and to contend that it is these efforts which keep the world from experiencing even more violence. The initiative, led by Pax Christi International and actively supported by the Maryknoll Office for Global Concerns, is facilitating an 18-month long "roundtable" dialogue with peacemakers around the world about ways to expand the role the Catholic Church plays in promoting a culture of nonviolence. (See page 3 for more information about the roundtables)

These are two women peacemakers involved in the roundtables:

Nora Carmi, a Palestinian Christian born just months before Israel was founded, is both a leading peacemaker and  refugee in her own divided city of Jerusalem. She knows the urgent need for ending the injustice in Palestine and Israel nonviolently. In reflecting on the nonviolent struggle of the Catholic Church in Palestine, Carmi recounts demonstrations in opposition to the extension of the Separation Wall in the Cremisan Valley of the West Bank. “(Priests) held a weekly outdoor Mass under the trees of the targeted lands. Each Friday afternoon, families whose lands were threatened as well as civil society and human rights organizations, diplomats, journalists, and non-Christians joined together in prayer.” She concludes that “whatever the future holds, nonviolence and ecumenical team work will win.”

Loreta Castro is a member of the steering committee of the Catholic Nonviolent Initiative and the Program Director of the Center for Peace Education at Miriam College, in Quezon City, Philippines. Castro promotes peace education and nonviolent conflict resolution both nationally and internationally. At present, her attention is focused on  Philippine President Rodrigo Duterte’s ‘war against drugs’  that has resulted in many killings and his legislative priority to reintroduce the death penalty.” Castro, with students and other members of the CPE, has organized vigils, rallies, silent marches, forums, and Masses, to speak out against the killings.

The collective hope of Rula Ghani alongside thousands of Afghan women, of Nora Carmi, Loreta Castro, and many other women in CNI, is to promote nonviolence and peace where it is so urgently needed.
Learn more about the Catholic Nonviolence Initiative at https://nonviolencejustpeace.net/.

Photo: Screenshot from video of Rula Ghani speaking at the U.S. Institute for Peace in Washington, D.C. on October 25, 2017.