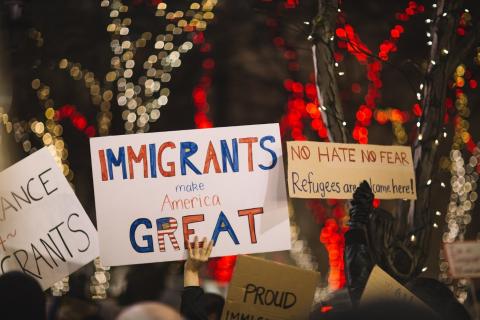 The Maryknoll Office for Global Concerns stands against the final version of the “public charge” rule which will bar those who have received some forms of government assistance from gaining legal immigration status. The following article appeared in the September-October 2019 issue of NewsNotes.

On August 12, the White House announced the final version of changes to the public charge rule that will make legal immigration more difficult for people who receive or have received certain government benefits such as non-emergency Medicaid and food stamps. The revised rule was published two days later and will take effect on October 15, 2019.

When the change was first proposed in October of 2018, the Maryknoll Office for Global Concerns joined other faith groups and immigrant rights advocates in urging the public to comment on the rule. According to Charles Wheeler, Director of Training and Legal Support for the Catholic Legal Immigration Network, Inc. (CLINIC), “There were surprisingly few changes (in the final version of the rule) from the October 2018 proposed regulations, (despite the fact that) a quarter of a million people voiced their opposition to the proposed regulations.” CLINIC is working to help lawyers and service providers navigate the new rule so their clients can access services they need without jeopardizing their immigration status.

The Maryknoll Office for Global Concerns maintains its opposition to the new public charge rule. The potential impact on poor and vulnerable families is inhumane and unfair. We are working with Maryknoll missioners on the border and with Catholic and interfaith advocacy groups in Washington to address the impact of the rule on immigrant communities and to advocate for more just policy.

“This rule will undermine family unity and lead many lawful immigrants to forgo vital assistance, including enrollment in nutrition, housing, and medical programs.  Families already in the U.S. will be faced with deciding whether to access critical assistance programs for which they qualify, knowing that in doing so they could jeopardize their ability to stay here with their loved ones. And, it will reduce the ability of many to reunify with family in the U.S. We have already seen the culture of fear that the anticipation of this rule has created in our communities. Ultimately, we believe that this rule is in tension with the dignity of the person and the common good that all of us are called to support.”

The rule incorrectly assumes that people who receive benefits now cannot become productive contributors in the future, a proposition that misrepresents U.S. history and belies the core assertions behind many government assistance programs and the church’s work for economic development and liberation. Maryknoll missioners’ work with migrants and poor families around the world rests on the twin beliefs that we are called to aid those in need and that liberation from poverty is both possible and imperative. This rule contradicts these beliefs.

Despite President Trump’s 2019 State of the Union address claim that “I want people to come into our country in the largest numbers ever, but they have to come in legally,” the Administration has consistently sought to reduce legal as well as illegal immigration. Even before changing the public charge rule, the news outlet Politico reported that authorities interpreted the old rule so as to deny higher numbers of visas compared to previous administrations. Between October 21, 2018 and July 29, 2019, over 12,000 visa applications from around the world have been denied on public charge grounds, up from just over 1,000 in 2016 under President Obama. For Mexican applicants, public charge denials are over 5,300 so far this year, up from just seven in 2016.

To understand the intent of these changes, they must be considered in light of consistent racist rhetoric from the Trump Administration. Mr. Trump has called Mexican immigrants rapists and murders; sought to effectively ban Muslims from entering the U.S.; referred to immigrants as animals, immigration as an invasion, and refugees as terrorists; called several low-income nations “shithole countries;” and told U.S. Congresswomen of color to “go back where you came from.” In defending the public charge rule, acting Director of U.S. Citizenship and Immigration Services Ken Cuccinelli suggested that the spirit of the poem on the Statue of Liberty is actually, “Give me your tired,  and your poor – who can stand on their own two feet and who will not become a public charge.” Taken together, the administration’s frequent statements and anti-immigrant policies, including the public charge rule, exhibit a pattern of xenophobia and racism. They are immoral and unacceptable.