Take action for immigrants by December 10! 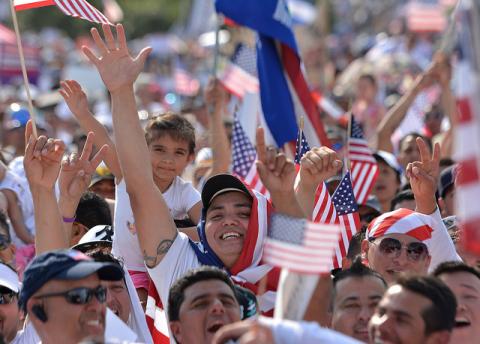 What are public charge rules

Currently, the federal government may deem prospective immigrants as “public charges” when they are likely to become wards of the state. The proposed rule change expands this definition in two separate and detrimental ways.

What the proposed changes mean

First, the proposed rule change so broadens the definition of “public charge” as to include millions of people who are already contributing members of society and the economy.

Second, it implicitly and incorrectly assumes that people who receive benefits now cannot become productive contributors in the future, a proposition that misrepresents U.S. history.

For example, the new public charge rules would unfairly target immigrants who have disabilities or have a U.S. citizen child with disabilities that rely on Medicaid – a crucial life-saving program for many. These immigrants would be barred from permanent residency and citizenship. But we know that nearly 44 percent of the United States' Fortune 500 companies were founded by an immigrant or a child of an immigrant. How many of those families accessed public benefits along the way?

Click here to submit your comments by December 10. Please personalized your comments. Identical comments will be counted as one comment.

If you or your family rely on public benefits like Medicaid or if you know immigrants who have ever used any public benefit – which is their legal right – and also make contributions to your community, please share that!

When you click here to submit your comments, you will see sample talking points to help personalize your comments.

Our position on this issue

Our position as members of the Justice of Immigrants Campaign of the U.S. Conference of Catholic Bishops states:

"Care for the stranger, the hungry, the sick, and the homeless are fundamental to our Catholic faith. The proposed rulemaking would have the effect of undermining access to critical public benefits for certain lawful immigrants and their families thereby damaging their ability to live their lives in dignity. Implementation of this rule would also undermine family unity, family stability, and presents threats to public health and life. We are, deeply concerned with the proposed rule, which we believe would undermine the fundamental life and dignity of persons that we are called to welcome and support. We are judged as a nation not by how we treat the powerful but how we care for the 'least of these.'"

Thank you for taking action!