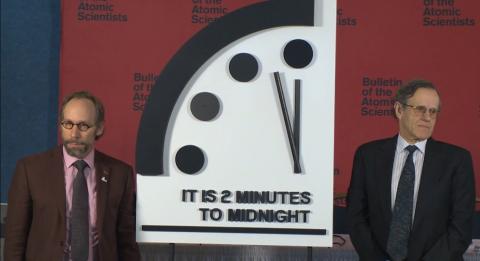 The Bulletin of the Atomic Scientists has reset the hands of the Doomsday Clock to 2 Minutes to Midnight.

We are as close as we have ever been - and closest since 1953, when the United States and the Soviet Union were conducting hydrogen bomb tests at the height of the Cold War - to nuclear Armageddon.

"It is urgent that, collectively, we put in the work necessary to produce a 2019 Clock statement that rewinds the Doomsday Clock. Get engaged, get involved, and help create that future. The time is now."
– Rachel Bronson, Bulletin of the Atomic Scientists President and CEO, January 25, 2018

Read about the Vatican's latest efforts for nuclear disarmament in "Integral Disarmament" in the January-February 2018 issue of NewsNotes.

Watch this beautiful 5-minute animation and listen to the powerful speech by Setsuko Thurlow, "If You Love This Planet," delivered on the day the nuclear ban treaty was adopted, July 7, 2017.

Send a message to President Trump. Urge him to sign the nuclear ban treaty and to support and attend the UN High-Level Conference on Nuclear Disarmamentin May 2018.

Submit comments to Nikki Haley, the U.S. Ambassador to the UN. Write your own message or copy and paste the following: “Like you, I value that the United States has a seat at the table during negotiations at the United Nations. Please do all you can for the United States to participate in the UN High-Level Conference on Nuclear Disarmament in May 2018. Please do your best at the conference to reduce nuclear risks and advance the abolition of nuclear weapons."

Contact your municipal leader or city council. Ask them to urge federal leaders to renounce nuclear weapons and participate in the nuclear ban treaty like the city of Northampton, Massachusetts did a few months ago.