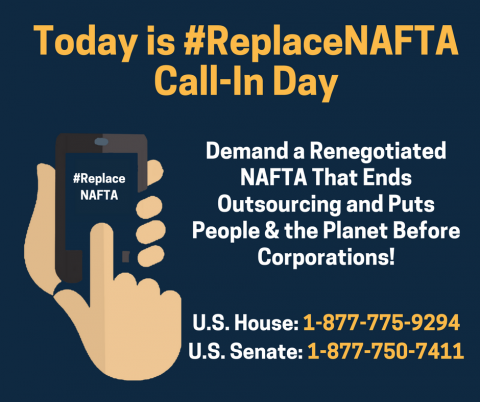 NAFTA negotiators are meeting in Washington the week of December 11-15, 2017.

Talks about changes to the trade deal which governs more than $1 trillion in annual commerce between Canada, the United States, and Mexico have been happening largely out of the spotlight and at breakneck speed, with repeated threats from President Donald Trump of quitting the deal altogether.

Over the past 25 years, NAFTA has enabled corporations to outsource jobs from the U.S. to Mexico to take advantage of weak and unenforced labor and environmental standards.  According to Bloomberg News, Mexicans are worse off today because of it – low wages, higher income inequality, unchecked threats to organized labor, as well as limited access to clean drinking water, healthy air, and proper sewage and waste disposal.

Please join us in delivering the message to Congress that we need a new NAFTA that benefits workers, the environment, and all vulnerable people throughout Canada, the United States, and Mexico.

Take action: Call on your Members of Congress to promote a vision of trade that upholds compassion for our neighbors down the street as well as across the border. Join labor, environmental and consumer groups, and people of faith across the country for a Day of Action TODAY, December 13!

Here’s what to do:

1. Make three calls to Congress. Follow the prompts to be connected to the offices of your elected officials.

2. Deliver the message that the people of Canada, the United States, and Mexico need a better NAFTA. Here’s a sample script:

“Hello, my name is _____ and I am from _____ [City, State]. [If appropriate] I am a member of _____ Church. I would like to leave a message about the NAFTA renegotiations. As a person of faith, I ask you to advocate for a trade deal that improves environmental and labor standards in all three countries, to ensure safe and healthy jobs, improve public health, and protect creation.”

Learn more about NAFTA and the renegotiations in our recent articles and statements:
The NAFTA we need: Open and transparent, serving the common good
What does renegotiating NAFTA mean?