Trade: What does renegotiating NAFTA mean? 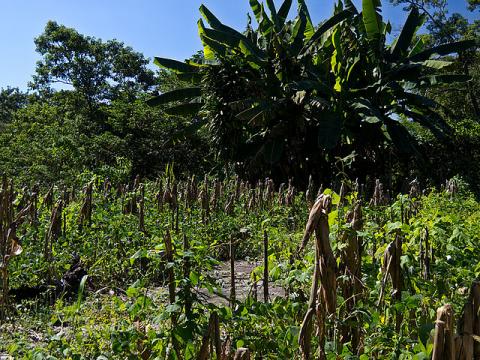 President Trump has agreed “not to terminate the North American Free Trade Agreement (NAFTA) at this time” but to “to bring NAFTA up to date through renegotiation.” How the lives, livelihoods, and the environment in Canada, Mexico, and the U.S. will be affected is uncertain. The following article was published in the May-June 2017 issue of NewsNotes.

Statements and tweets made by President Trump in recent weeks indicate that the long-rumored internal dispute among his advisors is causing the White House to issue competing visions and messages on trade. The Wall Street Journal, Politico, andthe New York Times have reported on the tensions and the actors involved, all based on leaks from unnamed administration officials.

On one side of the dispute are White House chief strategist Steve Bannon and Peter Navarro, the head of President Trump’s newly-established National Trade Council. They have been advocating for the U.S. to withdraw from NAFTA, the North American Free Trade Agreement signed by Canada, Mexico, and the United States that created a trilateral trade bloc in North America in 1994. On the campaign trail, Trump called NAFTA the "single worst trade deal ever approved in this country."

On the other side are President Trump’s son-in-law, Jared Kushner, and White House economic adviser Gary Kohn, a former Goldman Sachs executive. They are reportedly in favor of the U.S. remaining in NAFTA but forcing a renegotiation of terms. A leaked draft proposal to the Senate Finance Committee in March indicates that their proposal is similar to the terms of the Trans Pacific Partnership (TPP), a 12-nation deal that had been negotiated by President Barack Obama but which President Trump called "another disaster done and pushed by special interests." President Trump formally withdrew the United States from the TPP on his first full weekday in office.

The draft proposal to remain but renegotiate NAFTA was sent to the Senate Finance Committee just days before Steve Bannon and Peter Navarro offered President Trump a draft of an executive order to unilaterally withdraw from NAFTA – a move legal scholars are uncertain the president has the authority to make without congressional approval.

On April 27, administration officials told reporters that the president was preparing to begin withdrawing the U.S. from NAFTA. The following day, however, the White House said President Trump told the leaders of Canada and Mexico in phone calls that the U.S. will remain part of NAFTA, while the president seeks to renegotiate the deal.

What does this flip-flop mean? President Trump seems to be straddling two positions. He has, for now, committed to remaining in NAFTA yet also committed to pushing for renegotiations. If NAFTA does not become, in his words, a “good deal for the United States,” he says he will follow through on his threat to withdraw. At this point, though, it is unclear whether the president is really considering withdrawing from the agreement. The threat to withdraw from NAFTA seems to be a failed negotiating tactic.

Social movements from Mexico, the United States, and Canada released a statement before Trump’s inauguration which raised concerns about NAFTA renegotiations. They said that any trade deal needs to improve lives, livelihoods, and the environment in all three North American countries.

Over the past twenty-five years, we have seen NAFTA fail on all three of these counts.

Especially egregious is the provision which allows corporations to sue governments for perceived loss of profit when their investments are threatened by environmental, social, or other regulations. Countries must then defend themselves in private, opaque courts in front of a three-judge panel of corporate lawyers.

Although there have been recent wins, such as El Salvador fending off a suit from the mining company Pacific Rim (now Oceana Gold) over a country-wide mining moratorium, these cases cost millions of dollars for countries to litigate. The provision allowing corporations to sue countries over perceived loss of profit is now in every trade agreement the U.S. negotiates other than the U.S.-Australia agreement.

Other provisions of concern undermine livelihoods of small farmers with the imports of subsidized U.S. corn and provisions opening up a market for genetically engineered seeds that has indebted many small farmers with fees on seed patents. The deal also lacks environmental and labor standards, reduces access to life-saving generic medicines. It also includes an energy chapter that prevents Canada’s ability to restrict climate-polluting tar sands while allowing companies to sue governments over laws to curb climate change.

Photo: A typical Central American Milpa. (Note: the bananas in the background, although not native to Central America, are commonly found). Corn stalks have been bent, and left to dry (hence the dried cobs), and then beans are planted. Photo available in the public domain via wikimedia commons.