The NAFTA we need: Open and transparent, serving the common good 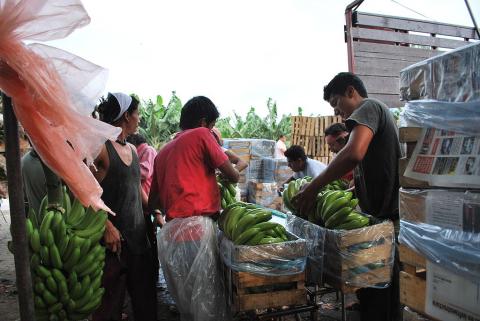 The Maryknoll Office for Global Concerns calls for an open and transparent NAFTA renegotiation that values people and Creation over profits.

As trade representatives from the United States, Canada, and Mexico begin renegotiations of the North America Free Trade Agreement (NAFTA), we call on negotiators to allow for an open, transparent and democratic process that ensures that all voices are welcome at the table and that our economic policies ultimately serve the common good.

"The world’s apathy toward the suffering caused by NAFTA’s economic failures is a prime example of what Pope Francis has repeatedly referred to as the ‘globalization of indifference.'"

We hope that negotiators will make meaningful changes to address deep economic inequalities, protect creation, and improve the health and wellbeing of all God’s people throughout North America. We fear that, without more accountability, a “modernized” agreement could expand investor privileges, make prescription drugs even less affordable, and further impoverish small farmers while doing little to improve worker and environmental protections.

“The world’s apathy toward the suffering caused by NAFTA’s economic failures is a prime example of what Pope Francis has repeatedly referred to as the ‘globalization of indifference.’” said Chloe Schwabe, Faith Economy Ecology Program Director with the Maryknoll Office for Global Concerns. “Maryknoll missioners serving in Mexico for more than 60 years witnessed the tremendous harm NAFTA caused across Mexico. NAFTA ruined the livelihoods of smallholder farmers and rural economies, and failed to create good jobs with fair wages in other sectors. NAFTA has ultimately contributed to a rise in migration to the United States and greater income inequality.”

While the North American economies are now inextricably linked, a NAFTA replacement that puts people ahead of profits could improve the quality of life in all three countries. Enforceable and binding labor and environmental protections, access to affordable medicines, and incentives to encourage the flourishing of local economies, will move the moral compass towards a more fair and just economy.