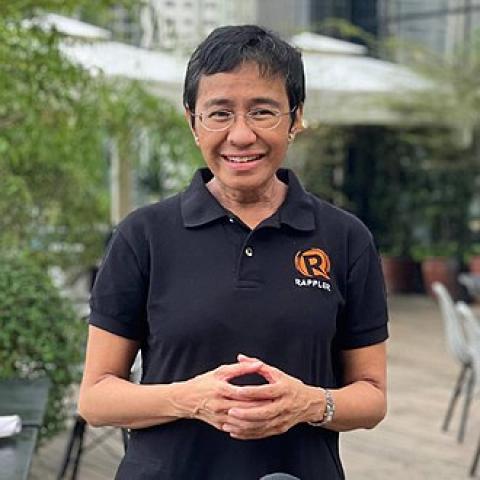 The Philippines is ranked as one of the most dangerous countries for journalists. This article was published in the November-December 2021 issue of NewsNotes.

The Nobel Peace Prize for Filipina journalist Maria Ressa has brought global attention to the struggle for human rights and press freedom in the Philippines. It is also the first time the prize has been awarded to a journalist. Ressa shares the award with Russian journalist Dmitry Muratov.

The Philippines is ranked by Reporters Without Borders (RSF)as being among the most dangerous places in the world to be a journalist. The situation has only worsened under President Rodrigo Duterte, whom RSF once called a "predator of press freedom."

When sworn in as president in June 2016, Duterte issued a grim warning: “Just because you're a journalist, you are not exempted from assassination if you're a son of a bitch. Freedom of expression cannot help you if you have done something wrong." RSF reports that four photojournalists were killed in 2020.

The government has developed several ways to pressure journalists who dare to be critical of the President Duterte and his “war on drugs” which Human Rights Watch says has led to the deaths of over 12,000 Filipinos to date, mostly urban poor. At least 2,555 of the killings have been attributed to the Philippine National Police.

Reporters Without Borders explains that after targeting the Daily Philippines Inquirer, the president and his staff embarked on a judicial harassment campaign against the news website Rappler and its editor, Maria Ressa, who has been the target of at least ten arrest warrants on a range of charges, all equally far-fetched.

After the Nobel committee awarded the Peace Prize to journalists Maria Ressa and Dmitri Muratov on Oct. 8, the Philippine Center for Investigative Journalist issued the following statement, signed by 42 media organizations and 156 individuals:

“We join our fellow Filipinos in celebrating the 2021 Nobel Peace Prize given to journalists Maria Ressa and Dmitri Muratov.

“We applaud the Nobel Committee’s recognition of the courage not just of these two journalists but of so many others who speak truth to power “in a world in which democracy and freedom of the press face increasingly adverse conditions.”

“As Filipino journalists, we are concerned about the fragile state of press freedom in our country, especially as the 2022 elections draw near. The climate for independent reporting is fraught. Lawsuits have been filed in an attempt to silence our colleagues. ABS-CBN, the country’s largest broadcast network, has been shut down. Frontline journalists, many of them just in their 20s and 30s, bear the brunt. They are moving targets for death threats, insults and unrelenting trolling.

“The pandemic has made access to information and to officials particularly challenging. Financially, news organizations are hurting. Politically, their legitimacy is under attack. But so many soldier on, bringing fact-based news and opinion in the belief that truth-telling matters, even in the era of lies and disinformation.

“Press freedom in the Philippines is resilient and enduring. This resilience was forged over time, from the struggle against colonial rule, the tyranny of authoritarianism and the challenges of democracy. Filipinos have defended press freedom because they know it is their right and that their hard-word democracy cannot thrive without it.

“The coming elections will be a battle between truth and lies. As journalists, we promise to remain true to the standards of fact-based and ethical newsgathering. But we are outnumbered by professional public relations staffs and troll factories. We alone cannot fight the deluge of disinformation in an election where the future of our democracy is at stake.

“We, therefore, call on all those running for public office to make clear their stance on press freedom and to be transparent about their public relations efforts. We ask political campaigns to respect the rights of journalists to report freely, without fear or favor. Before his death, Jose Luis Gascon, the late chair of the Human Rights Commission, proposed a Media Safety Unit. We endorse this proposal and hope that the new chair of the commission will be true to its mandate to safeguard our human rights.

“We call on social media companies to make their platforms safe for journalists.

“Finally, we ask the public to support a free press and journalists who expose lies and stand up for truth.”