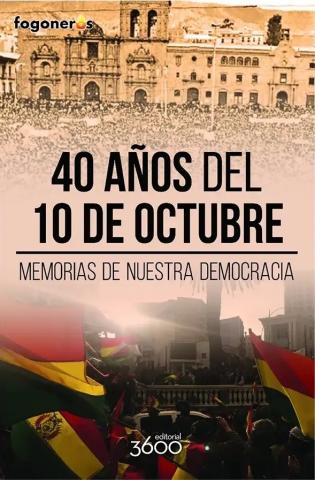 A group of Bolivian academics, journalists, and former government officials, concerned about the state of democracy in Bolivia after the 2019 elections and the subsequent ouster of then-President Evo Morales, has produced a new book, Los 40 años del 10 de octubre - Memorias de nuestra democracia (The 40 Years Since the 10th of October: Memories of Our Democracy).

Calling themselves the Fogoneros (Flamekeepers), the group hosted a panel discussion in Washington, DC on Nov. 16 that was live-streamed on Facebook, which included two of the book’s authors, Cecilia Barja, of the Vatican Dicastery for the Promotion of Integral Human Development, and Patricia Costas, sociologist and former Director General of Indigenous Autonomies for the Bolivian government. Dan Moriarty of MOGC, a returned Maryknoll Lay Missioner who served in Bolivia, also spoke on the panel.

The book is the result of a joint study of the history of democracy in Bolivia undertaken by the group over the last year. October 10 in the title refers to the day in 1982 when democracy was established in Bolivia after decades of de facto governments and the historical exclusion of the majority of Bolivians.

The authors examine this history from a variety of perspectives, through well-researched academic essays, personal accounts, and interviews. They emphasize that they do not offer an exhaustive or definitive take on Bolivian democracy, nor do they all draw the same conclusions. Rather, the book models the kind of dialogue they hope others in Bolivia will continue to promote, seeking a diversity of perspectives and learning together.

The book goes beyond basic, state-centered notions equating democracy with free and fair elections and considers communal forms of democracy, often formed by the church or other civil society groups to create spaces for dialogue and integration aimed at personal, social, and ecological transformation. The authors examine the historic conditions and dynamics that have allowed for or threatened democracy. By expanding their view beyond the partisan clashes of the news cycle, the Fogoneros have tapped into a long tradition of the Bolivian people “appropriating the democratic ideal not as a vehicle for achieving some golden socialism… but as an end in itself, a space to experience and develop the peaceful coexistence of the Bolivian people.”