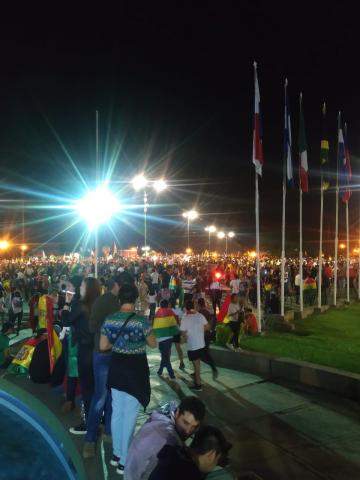 Dan Moriarty, an MOGC staff member and former Maryknoll Lay Missioner who lived in Bolivia for 17 years, discusses the unrest in Bolivia following the October presidential election. This article appeared in the November-December 2019 issue of NewsNotes.

Protests and unrest erupted across Bolivia following the presidential election on October 20. Incumbent Evo Morales appears to have won an unprecedented fourth term as president, avoiding a runoff election by a fraction of a percent. Protesters accuse the government of electoral fraud and reject Morales’s increasingly authoritarian populism. An indefinite, general strike concentrated in urban centers has lasted a week as of this writing.

Morales received 47.08 percent of the vote, 10.57 percent ahead of second-place candidate Carlos Mesa. In doing so, Morales avoided a runoff election by a portion of a percent, according to election law.

Irregularities in vote counting led to widespread allegations of fraud, although official observers have found no clear evidence of tampering. Official election-count websites were trending toward a runoff hours after polls closed, when, at 7:30pm, with over 80 percent of votes counted, the transmission went dark with no explanation from officials. Twenty-four hours later, transmission of the count resumed, with 95 percent counted and Morales edging toward avoiding a runoff. The Organization of American States, the European Union, and the Catholic Church all expressed alarm and called for greater transparency on the part of the government. The vice president of the electoral board and other election officials resigned. Morales has accused protesters of not wanting to wait until rural votes – which typically support the president – were counted. But Morales himself declared victory on the night of October 20,  long before all votes were registered.

Tensions had been rising in Bolivia in anticipation of the elections. The Bolivian constitution allows the president only two terms (Morales’s first term took place before the constitution went into effect in 2009). Voters in a 2016 referendum rejected a proposed change to the constitution that would have allowed Morales to run again. His Movement Toward Socialism (MAS) party then sued, saying that term limits were a violation of Morales’s human rights, citing international laws guaranteeing the right to political participation. A constitutional tribunal of judges appointed by the MAS agreed, rendering constitutional term limits inoperative. For many Bolivians protesting today, the fact that Morales was on the ballot at all is proof enough of fraud.

After Morales, Bolivia’s first indigenous president, was first elected in 2005 with an unprecedented simple majority, the opposition was largely led by right-wing oligarchs and was marked by racism and violence. Support for Morales increased to well over 60 percent over several years, as his “Process of Change” political program delivered steady economic growth and reforms, including the new constitution, leading to greater inclusion for Bolivia’s historically excluded indigenous majority.

In later years, however, Morales has lost support, especially in urban areas, but also among rural peasants, miners, and other laborers. Human rights and land defenders have been targeted by government forces, most notably in 2011, when indigenous marchers protesting plans to build a highway through their territory were brutally attacked by national police at Chaparina.

Morales has built the Bolivian economy primarily on extractive industries such as natural gas and mining – and, increasingly, on debt – and made numerous concessions to powerful agro-industrial interests, with devastating effects on the environment. Peasant groups who oppose such policies, appealing to indigenous traditions of living in harmony with the Pachamama (Mother Earth), are dismissed as tools of imperialist foreign NGOs.

Morales has attacked, dismissed, and maligned anyone who has opposed him, even from within his own movement. Echoing the language of populists around the world, Morales blamed his defeat in the 2016 referendum on “fake news.” Using increasingly messianic language to describe Morales, his vice president and others in the MAS repeatedly tell peasants, “Only Evo can save you,” warning that other politicians will strip away their rights.

Recently, indigenous and left-leaning protesters, many of whom initially supported Morales, find themselves in the uneasy position of sharing the streets with groups singing racist chants and supporting right-wing opposition candidates. Morales has sought to exploit this complexity, accusing all protesters of staging a coup motivated by racism and a desire to return to the neoliberalism and military dictatorships of the past. At the president’s urging, his supporters have taken to the streets, clashing violently with protesters and threatening to cut the flow of water and food to cities to end the strike.

It is unclear how the crisis will be resolved, but the struggle for Bolivian democracy is far from over.

Photo courtesy of the family of Dan Moriarty.