Exploring Our Call in Caring for Creation 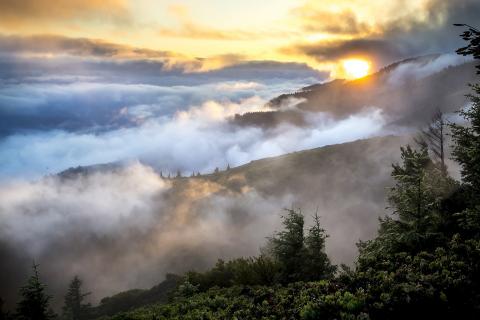 The following meditations are written by Ann Braudis, M.M. for participants in the Maryknoll Advanced Missionary Discipleship Formation Seminar  "Exploring Our Call in Caring for Creation." The seminar was held in Los Altos, California, August 7-11, 2017.

On a frigid and overcast day in early February, the annual Hudson River Eaglefest was held at Croton Point, land which juts out into the Hudson, in New York. The event celebrated the arrival of scores of bald eagles to winter-over on the shores of the Hudson, with its partially frozen water and supply of fresh fish and other forms of prey to feed on.

The day drew a large crowd of people and featured a good variety of programs that were informative and very enjoyable. Most impressive was the sense of connectedness with the Earth. Regardless of the poor weather, people tramped about in joyous amazement at what they saw. Those who had knowledge shared with ease and graciousness. Some had telescopes that enabled the rest to see eagles the untrained, naked eye would not have been able to spot.

Added to this, was an element of contemporary history that undergirded the day’s pleasure. By the mid twentieth century, the American Bald Eagle was basically extinct in the wild except in very isolated areas, due to loss of habitat and to toxic chemicals introduced into the atmosphere through modern human activity. This situation led to the bald eagle’s being declared an endangered species in the United States in 1967, followed by the enactment of legislation to control the use of pesticides, particularly DDT, a combination of chemicals originally used in chemical warfare and very effective in the short-term elimination of insects. At the time, the chemical industry strongly discouraged investigation of claims that DDT and other chemical combinations were having harmful effects on the natural world and on humans in some instances.

Silence is a feature of the Universe that seems more apparent in winter than in other seasons. The river outside my window is silent in its frozen state. Except for a few hardy specimens, the song birds have disappeared until spring. The leaves are gone from the trees and no longer rustle in the breeze, and when the snow falls it is utterly quiet. The silence of the outer world invites us to make space in our hearts for inner silence. Indeed, we are drawn to the quiet.

On the downside of winter, we creatures of Planet Earth find that we are affected by the diminished amount of sunlight available to us during winter’s short days. Whether plant, animal or human we experience a chemical reaction to the lack of light. The plants react most radically, withering away. Many animals respond by slowing down to a crawl while others head for the quiet of caves to rest or hibernate. We humans often feel sluggish, need to rest more, and might like to hibernate until the flowers begin to bud.

However, as a species, bit by bit, we have adjusted our ways of responding to winter in keeping with the emergence of self-reflective consciousness at the center of our being. In an evolutionary sense, we have gone beyond the instinctual responses of other mammals to being able to make choices that enhance the unfolding of life at the center.

We know that the sun’s apparently-changed position each day is caused by the rotation of the Earth as it circles the Sun on a tilted axis. At the December Solstice, occurring this year on December 21, the Northern Hemisphere is leaning farther away from the sun than at any other time of the year, accounting for the long, long night.

The occasion of the Solstice invites us to ponder the wonder of creation and the Infinite Presence, whose boundlessness continues to become manifest both in the magnificent recurring cyclical events that mark our years, and in the great evolutionary journey forward through space and time.

In these monthly reflections, we are strengthening our awareness of the emerging Universe considering the call issued in Laudato Sí to care for creation in an informed and responsible way.

As we approach the time of Advent in the Northern Hemisphere, the cosmic force that is most apparent is the waning of sunlight in the afternoon, and the long darkness that settles over the land until the morning sunrise.

According to Pope Francis, “Each year sees the disappearance of thousands of plant and animal species which we will never know, which our children will never see, because they have been lost forever. The great majority become extinct for reasons related to human activity. Because of us, thousands of species will no longer give glory to God by their very existence, nor convey their message to us. We have no such right." (Laudato Sí', 33)

The extinction rate is up to 100 times higher than it would have been without human activity.

As we approach the end of October and the first days of November when we traditionally remember our beloved dead, mourn their loss and hold them in our prayer; this year, let us expand our sense of loss to include the species that are forever gone due to human activity.

Equinox means the point when the dark and light of the day are most at balance. On a global scale, the equinoxes are at the points of the year when the entire world is in balance, with both Southern and Northern hemispheres receiving about the same amount of light. The equinox has another important feature as well: it is the only point during the year that the Sun rises in exact east and sets in exact west.

The Autumnal Equinox marks the point where growth is finishing and readying for winter is beginning. "Just as the trees will let go of their leaves and the plants their fruits, it’s time for all of us to take stock and see what we need to release." (Anne Key, "Fall Equinox – Blessings for Balance," Mother House of the Goddess, September 19, 2016.)

"On that day, says the Lord God, I will make the sun go down at noon, And darken the Earth in broad daylight." (Amos 8:9)

Our ancestors in faith could not help but notice the eclipse of the sun and attribute to it great spiritual importance in alignment with what they understood at the time. In our own day, we understand more about how the eclipse happens from the discipline of science and experience awe and reverence before its profound expressions of beauty and intelligence.

Since our faith tradition continues to unfold through us, we encourage each other to consciously bring into our prayer and ritual expression our deepest gratitude for the Cosmos, in its established order and in its continual emergence.  The solar eclipse provides an elegant opportunity to do so.