Exploring Our Call in Caring for Creation February 2018 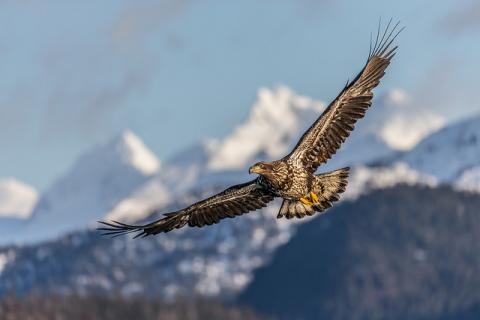 The following meditation is written by Ann Braudis, M.M. for participants in the Maryknoll Advanced Missionary Discipleship Formation Seminar  "Exploring Our Call in Caring for Creation." The seminar was held in Los Altos, California, August 7-11, 2017. Find more meditations by Sister Ann Braudis here.

February 2018: The Eagle and Transformation of Consciousness

Place yourself before something beautiful from nature and light a candle in honor of the Source of all Light.

On a frigid and overcast day in early February, the annual Hudson River Eaglefest was held at Croton Point, land which juts out into the Hudson, in New York. The event celebrated the arrival of scores of bald eagles to winter-over on the shores of the Hudson, with its partially frozen water and supply of fresh fish and other forms of prey to feed on.

The day drew a large crowd of people and featured a good variety of programs that were informative and very enjoyable. Most impressive was the sense of connectedness with the Earth. Regardless of the poor weather, people tramped about in joyous amazement at what they saw. Those who had knowledge shared with ease and graciousness. Some had telescopes that enabled the rest to see eagles the untrained, naked eye would not have been able to spot.

Added to this, was an element of contemporary history that undergirded the day’s pleasure. By the mid twentieth century, the American Bald Eagle was basically extinct in the wild except in very isolated areas, due to loss of habitat and to toxic chemicals introduced into the atmosphere through modern human activity. This situation led to the bald eagle’s being declared an endangered species in the United States in 1967, followed by the enactment of legislation to control the use of pesticides, particularly DDT, a combination of chemicals originally used in chemical warfare and very effective in the short-term elimination of insects. At the time, the chemical industry strongly discouraged investigation of claims that DDT and other chemical combinations were having harmful effects on the natural world and on humans in some instances.

It was the work of one woman, Rachel Carson, in her perfectly researched and beautifully presented book, Silent Spring, that initiated a demand for a thorough assessment of the effects of DDT and other chemicals on the environment, including effects on humans. Ultimately, Carson’s work occasioned an awakening to the interdependence of the human and natural worlds; this stimulated practical action through policy and legislation on the national, state and local levels.

One person with a keen ethical orientation, a gift for literary expression and a willingness to do detailed scientific research is known today as the founder of the environmental movement and honored as the person most responsible for the recovery of the American Bald Eagle.

Watch this short video entiteld "Biocides: Rachel Carson" that provides an excellent summary of the life and work of Rachel Carson.

There are 60 species of eagles that range all over the world; throughout history, these creatures have captured human attention, usually symbolizing the desire to surpass limitations or be in communion with the Sacred. The eagle is mentioned 30 times in the Old Testament. In the New Testament, John the Evangelist is identified with the eagle. The Native American People have reverenced the eagle from time immemorial, as seen in ceremony, music and dance.

The force of the imagery conjured up by the eagle at any time is set within the scope of the worldview of a given people and can change as people change the way they see the world, as their consciousness is transformed by new understandings calling for new behaviors.

The steps taken to preserve the bald eagle are indicative of a transformation in consciousness in terms of changing from seeing the Earth as a resource base to seeing it as the source of interconnected and interdependent life. In other words, the American Bald Eagle, national bird and national animal, has come to symbolize the nation’s growing awareness that we are part of the natural world and must assume responsibility for how we relate to it. This does not mean that every person acts from this level of consciousness; rather, it means that the path forward into the future is through this understanding. Fr. Thomas Berry said, “We must go into the future hand and hand with the natural world, or we will not go at all.” The restoration of the bald eagle is symbolic of what we, as a people, can do as we act from a new level of consciousness, a more comprehensive worldview.

There is one more point to be made regarding the transformation of consciousness. In fidelity to what she was drawn toward in research and in writing, Rachel Carson became the focal point for a phenomenal shift in awareness and action. We too can be catalysts for transformative change. In our spiritual tradition, Jesus is the first exemplar of this; he grasped that the Reign of God has to do with how we care for each other. He was single-minded in his alignment with this understanding, creating the Christian heritage, tradition and hallmark. Martin Luther King, acting from profound conviction and insight, occasioned a shift in attitude and legislation regarding human and civil rights. We do not know where inspiration for grasping life more fully will start, but it seems certain that living in fidelity to what we are drawn toward in the depths of our being is key.

As mentioned above, the figure of John the Evangelist is associated with the eagle. This is interesting to note because John, in the prologue to his gospel, seems to say that the Genesis story of creation must have an addendum to account for the Incarnation, for the new reality of the presence of Jesus and what he reveals about the Christ. The prologue draws us into a mystical apprehension that there is more to be grasped about the mystery of creation than we previously thought.

The challenge is not so much to understand what John meant in his prologue, as to grasp that each new generation of people must do the best it can to write its own prologue; a prologue rooted in what is now known and understood that previously was not known or understood.

Like the eagle, we must soar to the heights and cast our vision into the distance and into the depths to take in all that we can, now.

Listen to the music of Jan Novotka, "Awakening Consciousness".


“As we enter the twenty-first century, we are experiencing a moment of grace. Such moments are privileged moments. The great transformations of the universe occur at such times. The future is defined in some enduring pattern of its functioning.” – Thomas Berry, The Great Work, 196

God our Creator, we desire to be faithful to the transformative moment that is arising within us.

Response:    May we be drawn into your holy depths.

Glory to you, Source of all being, Eternal Word, and Holy Spirit.
As it was in the beginning, is now and ever shall be,
World without end, Amen.

Closing Music: Spirit of the Flying Eagle, by Pachuly and Friends