Women at the Synod on the Amazon: Protecting Life 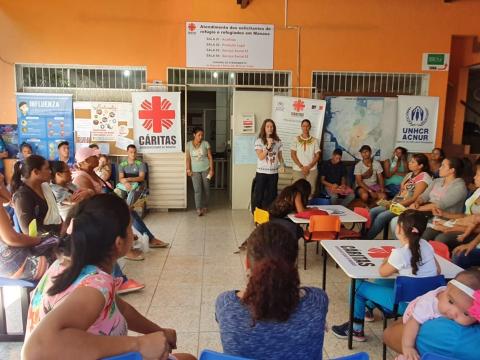 Sister Roselei Bertoldo, ICM, works to combat human trafficking in the Amazon region of Brazil. Sister Bertoldo offered the following comments on the concerns of women and indigenous communities in the Amazon just days before traveling to Rome to participate in the Synod on the Amazon as an auditor.

I was invited to participate in the Synod on the Amazon as a representative of the Cry for Life Network (Rede um Grito pela Vida), which works to raise awareness of and to prevent sexual abuse and exploitation and human trafficking in Brazil. For years now, our team has been doing tremendous work on prevention, leadership development, service to victims, and political advocacy in river communities, indigenous territories and numerous cities across the Amazon. 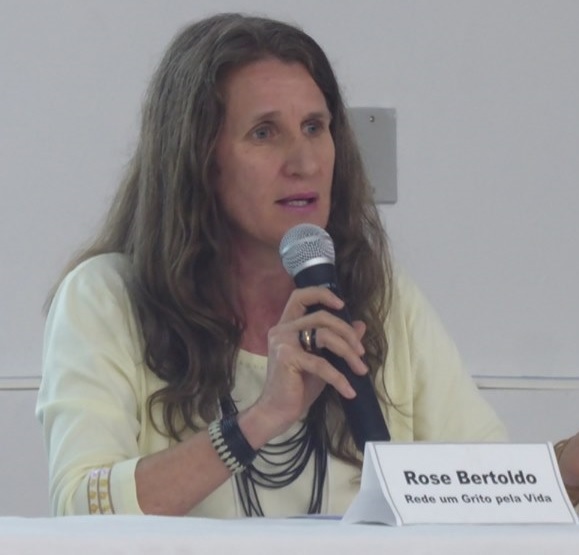 Leading up to the Synod, I participated in numerous consultations in different venues across the Amazon and also in the Pan-Amazon region. More than 87,000 people participated, of whom 53 percent were women. During this process, we examined the Synod’s working document (Instrumentum Laboris) and we heard the voices of women across the Amazon naming situations of death, for example, the destruction of the environment and indigenous communities. This was very clear. The destruction of lives on the periphery of cities, the disregard of the situation by politicians, and the lack of social programs at the local and state level, can be easily seen.

These situations create death: big development projects, mining, and monoculture crops by agro-business. All have consequences that affect the lives of women and their families. Enslaved labor, the exploitation of life for profit, of the bodies of women and children, youth suicides, especially among the indigenous, are all problems that kill life here.

The Amazon region of Brazil has the highest rate of trafficking of women for sexual exploitation in the nation. Also, the disappearance of children is often attributed to organ trafficking and sexual exploitation. It is not clear which is more common. There are also many cases of domestic servitude of indigenous girls, enticed to come to the city with the promise of being able to study only to be held prisoner in the homes of families and exploited. We lack exact statistics because these situations are under-reported.

The women of the Amazon bring to the surface all of these realities: internal migration and international immigration, the lack of jobs and life opportunities. The expulsion of communities in the rural regions due to mega projects such as hydro-electric dams, mining, and agro-business also destroys local cultures.

Women of the Amazon are not quiet when faced with these realities that destroy life. During my travels across the region, I have observed that the people who most preserve the forest and the rivers live in indigenous communities in which women play an important role. Indigenous peoples do not have a dualist vision of life; they do not separate themselves and nature because the land, water and forests are part of them. Their celebrations, rituals, dances, and food are intertwined with nature. There is no separation.

I have learned much from indigenous cultures. I most appreciate the dimension of silence, of listening, of respect that exists between them. I have learned that not everything needs to be explained, but rather lived. For me, the greatest wisdom of indigenous people is the dimension of sharing. In indigenous communities, no one goes hungry. When they hunt and bring in their crops, it is divided and shared. There is no notion of accumulation. When there is food, everyone eats. When there is none, they are all together in solidarity with this fact.

There is another dimension, of caring. The children of indigenous people are cared for by the community. The mother and the father are responsible but the community cares, protects, and educates the children. When they leave the community, they are vulnerable because of the belief that the community will care for them. When they go to the city, they often fall prey to cycles of violence and violations of human rights.

I will take to Pope Francis the voices of these women who say the Church cannot be silent in the face of such violations. In the process of evangelization, the Church must protect life. When women are violated, when their bodies are violated, the Body of Christ is violated. Many women say that the Church is present, caring for the people, their cultures, and the land. Where the Catholic Church is no longer present, however, for example, where evangelical churches have been planted, some say there has been an increase in illegal mining and exploitation.

We want to say to Pope Francis that the Church plays an important role in protecting life in the Amazon. It is not possible to talk about evangelization in the Amazon without considering the problems of violence against women, femicide, violence against youth, sexual abuse and exploitation.

I am confident that the Church will make advances at this Synod. A total of 42 women will participate – the largest presence of women at a Synod. Women will have the right to speak, but not the right to vote. There will be women who say directly to the pope that we do not just want to be heard and valued; we also want the right to participate in decision-making. Even with the understanding that this is a Synod of Bishops, we want to remember that this Synod has had a long and wide consultation process leading up to today.

During the consultation process, women also raised the question of their role in access to the sacraments. They expressed their desire to participate in the Church as decision-makers. Women say they want to be deacons to give legitimacy to the work that they already do in their communities. There are communities in the Amazon where a priest comes only once a year to administer the sacraments and women are asking ‘why can't we do the sacraments?’ They are asking to be allowed to preside over baptisms, marriages, confirmations, confessions, and the celebration of the Eucharist. Women need to be recognized for what they have been doing in the Church for a long time: taking on leadership roles and coordination of their communities.

I don't know what the Synod will decide in regard to the question of [ordaining older married men as] priests but Pope Francis points in the direction for the Church to follow with the naming of the working document "Amazonia, new paths for the Church and for an integral ecology.”

What are the new directions that the Synod will consider? I believe the role of women as deacons is one. This kind of participation is a right that we women have in our communities.

We live in a time of hope!

Find all our resources on the Synod on the Amazon

Note: Translated from the original Portuguese to English by Maryknoll Lay Missioner Kathy Bond.
Image 1: Sister Roselei Bertoldo, ICM, holds the microphone and speaks to a group of women about sexual abuse, exploitation and trafficking in Manaus, Brazil in August, 2019. Photo courtesy of Sr. Bertoldo.
Image 2: Sister Bertoldo speaks at a conference as a representative of the Cry for Life Network in Manaus, Brazil in February, 2019. Photo courtesy of Sr. Bertoldo.