My Experience at the Amazon Synod 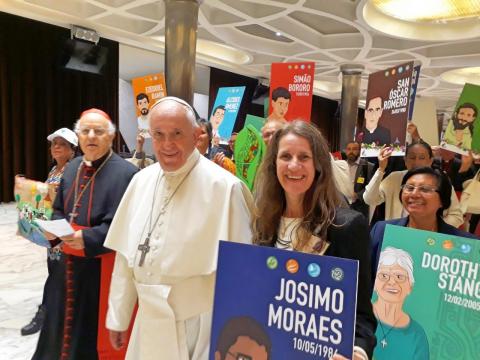 Sister Roselei Bertoldo, ICM, works to combat human trafficking in the Amazon region of Brazil and attended the Synod on the Amazon in Rome, October 6-27, 2019.

I write a few lines in an attempt to describe the synodal process, which began in Porto Maldonado in October 2017, when Pope Francis announced the Special Synod for the Amazon, with the theme: “New paths for the Church and for Integral Ecology.”

No Separation Between Land and Life

Being part of the Synod process was an immense gift. I was able to participate in the preparatory phase, including the assemblies and series of conversations and seminars with people from the Amazon region. I read the reports of the Regional Norte 1 preparatory gatherings, which included dialogue with nine dioceses and prelatures. Studying this immense wealth of experience made me aware of the extent of the wounded lives, the destruction experienced by so many communities, and the pain caused by a system of death that puts profit above life.

It was also beautiful to learn about the resistance to that culture of death, the concern for all life, and the many initiatives for the care for our common home from the peoples of the Amazon. For them, there is no separation between the land and life itself. The working document for the Synod, Laboris Instrumentum, was a synthesis of the voices of the more than 87,000 people who participated in the preparatory listening process in the pan-Amazonian region.

A Time of Grace

It was also a gift to participate in the Synod itself in Rome as an auditor. The Synod made me believe that we are living in a time of grace. The three-week meeting was a fruitful time in which participants were guided by the Spirit revealed in the little things of everyday life. I carried with me all of the voices and realities of the people who participated in the preparatory process in the Amazon region.

We were 283 participants, including synodal priests, auditors, regional experts, fraternal guests, and collaborators from special secretariats. The assembly took place in a climate of goodwill and respect for differences and ways of understanding life. Pope Francis was present during the whole Synod, listening carefully to the many stories shared and ideas put forth based on the realities in the Amazon. At various times, when there seemed to be no clarity in the dialogue, the pope contributed simple insights that indicated the way forward. It was a long process of listening, built by many hands, a process of dialogue and walking together.

In this journey together, the presence of indigenous peoples and women made a difference. Their deep and powerful interventions in the assembly were often demonstrations of resistance, indignation, and celebration, interweaved with chanting and applause. The Latin, feminine way of being church drew the attention of all participants.

The twelve or so small working groups of the Synod, organized by language, were where participants clarified points and explored more deeply ideas that had been articulated in the large session. There was a greater freedom of expression and more time for participants to speak in the small groups than in the large assembly. These small groups greatly contributed to the proposals in the final document presented to the Synod Fathers and the pope on the last day of the meeting.

The invitation to conversion permeates the final document because "without conversions there are no new paths." We are invited to an integral conversion, which translates into "a simple and sober life" on a personal and community level. The Church is committed to being allied with the indigenous populations, the text repeats, especially in condemning attacks on their lives. The final document makes clear that the Church stands with the people.

A special highlight was the participation of the 36 women at the Synod. We made significant contributions, weaving together threads from the small working groups and large assembly. I believe it would not have been the same if we had not been in that Synod room. In addition to clear, firm, strong interventions, full of prophetic witness, we made many contributions in the small working groups, in the presence of the synod priests and among ourselves, articulating thoughts as only those who do not conform to established structures can do.

We women made great strides. We may not be able to translate what they all mean right now, but we are sure that we have left a legacy for future generations by opening new paths to a church with a feminine and feminist face, a church that builds and grows, so that we have communities that take care of life and our common home.

Change begins with each of us

Pope Francis defined the Synod on the Amazon as the offspring of Laudato Si ́, the document which set forth our need for ecological conversion to address an ecological crisis so profound that if we do not change course, we will continue down a path to destruction. Change begins with each of us.

While the Synod was taking place in Rome, REPAM (Network for the Pan-Amazon Region) organized more than 240 events and exhibits as part of the “Tent for Our Common Home” in the Church of Traspontina, near St Peter’s Basilica, and at local universities and other spaces where indigenous people and others attending and interested in the Synod can meet to pray and share about the reality of the Amazon. [Visit the website: http://amazonia-casa-comun.org/] Many people participated, including the Indigenous Missionary Council, or CIMI, a committee of the Brazilian bishops’ conference, NGOs, religious congregations, and many indigenous peoples.

With the conclusion of the Synod, we now begin what is perhaps the slowest and deepest process, which is to put into practice the recommendations of the Synod. This requires that we walk together, change our mentality, and build new pathways in a society and church that is diverse and plural, and that seeks to protect life and promote integral ecology.

I extend enormous gratitude to Pope Francis, and also to the women with whom I shared these 21 days of the Synod. There was much synergy, which was a deep learning experience for me. We exchanged our experiences and knowledge in a profound expression of faith and hope. Each person left a mark on this process of understanding that the sacredness of life extends much farther than we previously believed and that we are the great generators and caregivers of life and earth, our common home.

As I contemplate this journey, I reaffirm the prophetic dimension of women's lives as a collective, of our feminine / feminist being, and of the need for and depth of our walk, hand in hand for peace and justice, for the care for integral ecology, because we do not separate any of it from our lives.

Cry of hope of the Church

I conclude with the words Pope Francis spoke in his homily during the Amazon Synod closing Mass:

“In this Synod we have had the grace of listening to the voices of the poor and reflecting on the precariousness of their lives, threatened by predatory models of development, And yet, precisely in this situation, many have witnessed to us that it is possible to look at reality differently, welcoming it with open hands as a gift, dwelling in creation, not as a means to be explored, but as a house to be guarded, trusting in God. He is a Father and, says Ben Sirá, ‘will hear the prayer of the oppressed’ (35:13).”

“How many times, even in the Church, have the voices of the poor not been heard and perhaps scoffed at or silenced because they are inconvenient,” the pope said. “Let us pray for the grace to be able to listen to the cry of the poor: this is the cry of hope of the Church. When we make their cry our own, our prayer, too, will reach to the clouds.”

Photo of Sister Roselei Bertoldo, ICM, and Pope Francis walking with fellow participants at the Synod of the Amazon in Rome. Photo courtesy of Sister Bertoldo.