U.S.-Mexico border: ‘This is not a war zone’ 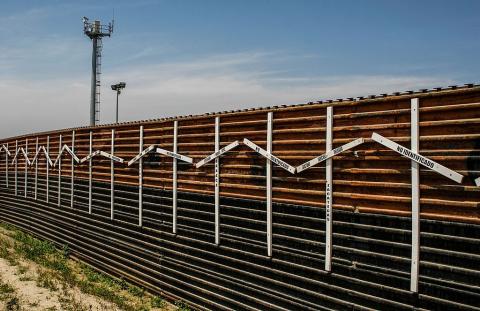 Catholic bishops from eight dioceses in Texas, Arizona, and California issued a statement criticizing President Donald Trump's announcement on April 4 that he would deploy National Guard troops to the U.S.-Mexico border. The following article was published in the May-June 2018 issue of NewsNotes.

A migrant caravan, supported by the group Pueblo Sin Fronteras (People without Borders), was walking through Mexico toward the border with the United States on Easter Sunday, April 1, when President Donald Trump seemingly referenced their movement in a tweet that characterized the U.S.-Mexico border as “Getting more dangerous. ‘Caravans’ coming.”

Pueblo Sin Fronteras described the more than 1,000 people in the caravan as mostly from Honduras and mostly women and children “who were forced to flee their countries of origin due to persecution and violence.” Upon reaching the border, the migrants had planned to turn themselves in and request asylum in the United States, the humanitarian organization said. After President Trump’s tweet, however, most of the migrants left the caravan in Mexico City, telling volunteers from Pueblo Sin Fronteras they now hoped to seek asylum in Mexico.

The caravans are known in Spanish as Via Crucis Migrantes, or Migrants' Way of the Cross. This is at least the fifth year volunteers from Pueblo Sin Fronteras and some local organizations have provided meals, bedding, and other support along the journey to protect families from getting separated or preyed upon by criminals.

President Trump characterized the caravan not as a humanitarian crisis but rather a security crisis. Three days after his tweet, the president officially signed a memorandum to deploy 4,000 National Guard troops to the border, even though the number of apprehensions there recently reached a 40-year low. In his order, President Trump said that “the lawlessness that continues at our southern border” forced him to act.

The plan to bring the military to the border was swiftly rebuked by Catholic bishops there.

“The continued militarization of the U.S.-Mexico Border distorts the reality of life on the border; this is not a war zone,” wrote eight Catholic bishops from dioceses that line the border in an April 6 letter addressed to the presidents and people of both Mexico and the United States. “Seeking refuge from persecution and violence in search of a peaceful life for oneself and one’s family is not a crime,” said the bishops from Brownsville, San Antonio, San Angelo, Laredo, El Paso, Las Cruces, Tucson, and San Diego.

The reality is National Guard troops will be able to do little but build and maintain roads and border infrastructure and assist surveillance. Unable to conduct domestic law enforcement under 1878 Posse Comitatus Act, the troops will enable more Customs and Border Patrol (CBP) agents to deploy in the field and at checkpoints within the 100-mile-deep border zone. There are already more than 16,600 Border Patrol agents assigned there, along with some 6,500 customs and immigration officers working at ports of entry.

While previous deployments to the border have conformed to a supporting role, they have proven deadly. When U.S. Marines deployed to Texas on a drug interdiction mission in 1997, a Marine shot and killed 18-year-old Esequiel Hernández Jr. while he was herding his family’s sheep in the tiny town of Redford. Some officials who investigated the case speculated that Hernández thought wild dogs that had been bothering his herd were back when he fired his grandfather’s decades-old rifle in the direction of four Marines, who were 200 yards away and wearing camouflage. After silently tracking him for twenty minutes, one of the Marines shot Hernández dead. No one was charged with a crime. A film about the incident and ensuing scandal, “The Ballad of Esequiel Hernandez,” won best-documentary awards at the Santa Fe and Mexico City film festivals in 2007 and at the El Paso film festival in 2008.

Some governors are saying President Trump’s plan to deploy troops to the border is politically-motivated, meant to boost support for a border wall, and that it costs too much. The most recent deployment, in 2014 by then-Texas governor Rick Perry, cost $12 million a month for 1,000 troops. That would mean nearly $50 million a month for President Trump’s plan, with no end in sight.

The eight Catholic bishops along the border expressed concern that the current “divisive rhetoric often promotes the dehumanization of immigrants as if all were threats and criminals.” They implored all involved to ignore the rhetoric and remember that migrants are our sisters and brothers in Christ.

“We remain hopeful that our local, state, and federal officials will work collaboratively and prudently in the implementation of this deployment,” the bishops said, “ensuring that the presence of the National Guard is measured and not disruptive to community life.”

Faith in action: Read and share the bishops’ letter on the National Guard at the border http://bit.ly/DioceseofLaredo