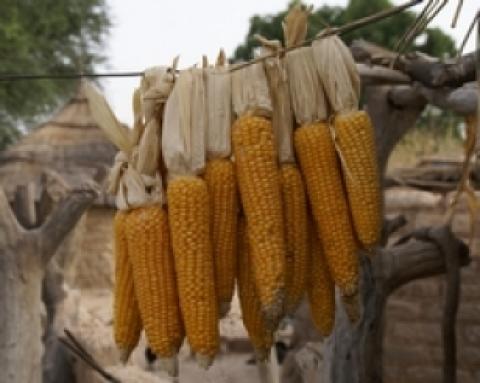 Maryknoll Father Ken Thesing, a delegate of religious congregations at the United Nation’s Food and Agriculture Organization (FAO) in Rome, writes about the 2nd International Symposium on Agroecology for Food Security and Nutrition held at FAO headquarters on April 3-5, 2018. The following article was published in the May-June 2018 issue of NewsNotes.

Some 815 million persons around the world suffer chronic hunger because they cannot access sufficient food. After steadily declining for over a decade, this number appears to be on the rise once more. These two disturbing facts are presented and analyzed in a 132- page report “The State of Food Security and Nutrition in the World 2017,” published last September by the Food and Agriculture Organization (FAO), a specialized UN agency based in Rome of which I am an advisor.

In the just-over 70 years since World War II and FAO’s launch in 1945, food has become more available per capita in the world by about 40 percent. There is enough food in the world to feed everyone.

Most experts say the ‘Green Revolution’ is responsible. Also known now as agribusiness or industrial agriculture, the research and initiatives that began in the 1940s and continued throughout the 1960s increased food production and productivity rapidly based on input-intensive agriculture, that is, the use of large inputs of energy from fossil fuels (especially oil and natural gas), water, fertilizer, and pesticides to produce large quantities of crops and livestock for sale.

I remember it well. I was a boy growing into adulthood on a farm in Minnesota, USA. I spent many Saturdays picking up brochures from the Agriculture Extension office in our hometown and reading the latest research from the land-grant University of Minnesota Agriculture Research Stations.

The Green Revolution productivity model worked in its time but its limits have become apparent over the years. Chronic hunger remains persistent in the world: Almost one in five deaths globally is due to poor diet; nearly one in three people worldwide suffer from malnutrition, some 2 billion from a lack of essential micronutrients in their food. The FAO report describes hunger as a product of poverty, not lack of food, and blames its recent rise on the increasing number of violent conflicts.

A second limit to the Green Revolution is the high cost to the environment. Agriculture and our food systems account for around 30 percent of greenhouse gases – only the energy sector contributes more.

“It is time to innovate,” said Jose Graziano da Silva, Director-General of FAO. “This time, innovation means increasing the resiliency and sustainability of our food systems, especially in the face of climate change.”

FAO is looking at agroecology as one possible way to innovate. In October 2016, the FAO’s World Committee on Food Security, at civil society’s urging, established a high level panel of experts on agroecology with the objective of releasing a report on the topic in 2019. According to FAO, agroecology “brings together scientific disciplines, social concepts and practices” and “provides multiple benefits to society and the environment, by restoring ecosystem services and biodiversity.”

FAO held the 1st International Symposium on Agroecology for Food Security and Nutrition in 2014. It looked at the benefits of agroecology and was the impetus for a “Global Dialogue” in 2015 and 2016 that involved 162 member countries. Regional meetings were held in Africa, Asia, Europe and Latin America.

In April, FAO held the 2nd International Symposium to share and discuss policies to “scale-up and scale-out” agroecology. “The results of our experience and of this Symposium must lead to introducing the principles of agroecology in our FAO work program,” Graziano da Silva said at the closing of the three-day conference.

The Director-General of FAO also named agroecology as a method to achieve two of the UN’s seventeen Sustainable Development Goals (SDGs): Goal number 2 is ‘Zero hunger’ and Goal number 17 is ‘Partnership.’ To fulfill the theme of the 17 SDGs – leave no one behind – “means partnerships must be built everywhere we can,” Graziano da Silva said.

He also said that agroecology is not just a technical matter. “I stress the social aspect; it is to strengthen family farmers, women and youth.”

FAO has established a new “Scaling-up Agroecology Initiative” and Agroecology Knowledge Hub website to move the topic of agroecology from dialogue to activities at the regional and country level.

Before Graziano da Silva made his closing remarks, His Excellency Archbishop Silvano Maria Tomasi, Secretary of the Dicastery for the Promotion of Integral Human Development at the Vatican, spoke briefly about the interconnectedness of ecology, humans, and agriculture, and expressed support for FAO’s agroecology efforts. “Truly much can be done,” the archbishop said. “Working together, it can be done.”

Faith in action: Learn more about the principles of agroecology from CIDSE: https://agroecologyprinciple.atavist.com/