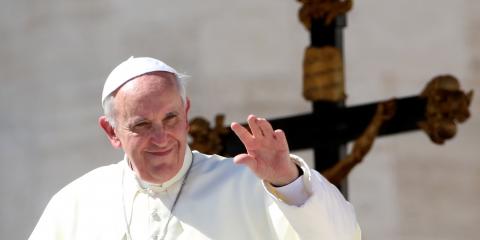 Guaranteed monthly income is seen as a way to stabilize society in an era of turbulent shocks and change. This article was published in the January-February 2021 issue of NewsNotes.

In his new book, Let Us Dream: The Path to a Better Future, Pope Francis writes,“Our definition of the value of work is… far too narrow. We need to move beyond this idea that the work of the caregiver for her relative, or a full-time mother or volunteer in a social project, is not work because it pays no wages. Recognizing the value to society of the work of nonearners is a vital part of our rethinking in the post-COVID world.”

“That’s why I believe it is time to explore concepts like the universal basic income (UBI)… an unconditional flat payment to all citizens, which could be dispersed through the tax system.”

With this, the pope joins a growing body of world leaders and economists looking more seriously at a regular transfer of funds by governments to citizens as a solution to a host of social, environmental, and economic problems. Historical figures as varied as Dr. Martin Luther King, Jr., former President Richard Nixon and economist Milton Friedman have all backed versions of such a policy. Modern-day proponents include the governments of Spain and Germany, as well as Tesla CEO Elon Musk and Facebook’s Mark Zuckerberg.

Most recently in the United States, eleven mayors launched a campaign to guarantee a basic income for the more than 5 million people they collectively represent. “Mayors for a Guaranteed Income” aims to lift people out of poverty and use UBI as a tool for racial and gender equity.

This comes after U.S. presidential candidate Andrew Yang elevated the issue to the national stage by making a $1,000 monthly payment his signature policy idea. In the final days of 2020, Yang's Humanity Forward organization said it has discussed potential “recurring economic relief” with the incoming Biden administration.

Like many others, Pope Francis sees the UBI as a vehicle to “reshape relations in the labor market, guaranteeing people the dignity of refusing employment terms that trap them in poverty. It would give people the basic security they need, remove the stigma of welfarism, and make it easier to move between jobs as technology-driven labor patterns increasingly demand. Policies like the UBI can also help free people to combine earning wages with giving time to the community.”

A survey by Vox of UBI experiments around the world found that a basic income tends to “boost happiness, health, school attendance and trust in social institutions while reducing crime.” Contrary to the belief that a UBI would result in people working less, most experiments saw little change in employment. But, almost universally, participants reported less stress and more overall happiness.

While the UBI has support from people of different political persuasions, detractors often cite the possibility of generating inflation, the loss of motivation to work, unforeseen societal effects and the overall cost of such a program. Some also worry that poorer families would be worse off with a UBI if important means-based programs are eliminated to pay for it.

Critics point out that the results of UBI experiments thus far are temporary and include only hundreds or thousands of low-income and unemployed workers, and thus are not universal nor permanent, two basic characteristics of a true UBI.

The cost of a UBI tends to be the predominant concern of most critics. Cost estimates for different proposals that would provide $1000 per month to all adults in the United States range from $2 to $3 trillion, more than what is spent on Medicare and Social Security each year.

A possible solution came in January 2019 in a public statement by the largest number of economic experts yet – more than 3,500 economists, Nobel laureates and former chairs of the Federal Reserve. Their proposal, a carbon tax and dividend system, could pay for a UBI program while also dramatically reducing carbon emissions.

One of the drawbacks of the proposal – that the carbon dividend would eventually fade away – could be addressed by securing other sources of funding after the positive effects of a UBI are recognized on a national scale.

With more crises like COVID-19 predicted in the near future due to climate change, loss of biodiversity, and future pandemics, it is time to consider how we can guarantee that we survive such struggles with minimal suffering. A UBI could be an important part of our future.