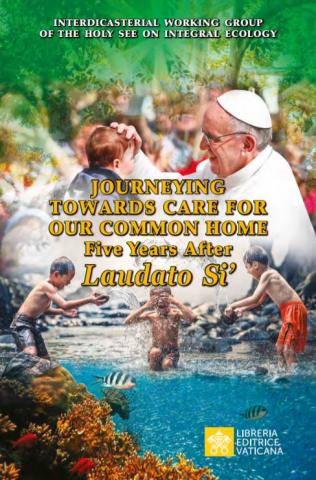 New Vatican publications urge communities to put Laudato Si’ into action.This article was published in the November-December 2020 issue of NewsNotes.

Five years after the publication of Pope Francis’ landmark encyclical on the environment, Laudato Si’, the Vatican is calling for renewed efforts to put its ideas into action – to move beyond words, as Pope Francis has said and toward “concrete and pressing action” to care for our common home. The urgency of the ecological crisis, coupled with the grave concerns facing humanity during the COVID-19 crisis, mean that, according to Pope Francis,“concrete decisions can no longer be postponed.”

In June, the Vatican published a document entitled “Journeying towards care for our common home: Five years after Laudato Si’,” for which the English translation was released in September. This document is an “action-oriented” text based off of Laudato Si’, directed at “local churches, local communities, politicians, and all people of good will” to help them implement concrete initiatives to address climate change and promote integral ecology, the central concept of Laudato Si’, or the idea that pressing human needs and environmental concerns are fundamentally interrelated.

The document explains that while the Church’s expertise and primary capacity is “educational, pastoral, and cultural,” rather than “technical and scientific,” the Vatican wishes to “present various operational proposals” developed through consultation and social analysis, “with the aim of inspiring action on the part of Church institutions, believers, and all people of good will.”

The document is divided into two chapters, each with several sub-sections. The sections in each chapter include examples of “good practices” by church and faith-based organizations around the world, and “lines of action” of suggested next steps. The first chapter, “Education and Ecological Conversion,” focuses on how to encourage ecological conversion and the values of integral ecology in schools, parishes, and ecumenical and interreligious settings. The second chapter is entitled “Integral Ecology and Integral Human Development” and includes subsections on social concerns topics such as food and nutrition, energy, and finance.

Some of the proposals are strikingly specific and visionary, highlighting the Vatican’s close consultation with subject experts and hope for significant transformation at the local and global levels. Perhaps most notably, in the section on finance in the second chapter, the Vatican urges organizations and businesses to “[take] care not to support companies that harm human or social ecology (for example, through abortion or the arms trade), or environmental ecology (for example, through the use of fossil fuels).” This was noted by Catholic environmental groups in June as the first official endorsement of fossil fuel divestment campaigns by the Vatican. It closely followed the announcement by 42 faith-based organizations of divestment from fossil fuel companies.

Following up on this call to action, Pope Francis delivered his second Ted Talk in October, entitled “Our moral imperative to act on climate change -- and 3 steps we can take.” In the 12 minute video, the pope invites “all people of faith and good will” on a “journey of transformation and action…made not so much of words, but rather of concrete and pressing actions,” the goal of which is to “build, within the next decade, a world where we can meet the needs of the present generations…without compromising the possibilities of future generation.”

The first step suggested by the pope is “an education geared toward the care of our common home, developing the understanding that environmental problems are linked to human needs.” Such an education, he said, requires both a scientific and ethical approach.

The second step focuses on water and nutrition, naming the human rights to water and food and explaining that food production must shift towards “non-destructive farming methods,” so that addressing human needs does not come at the expense of future generations.

In the third step, Pope Francis calls for energy transition, or a “gradual replacement, but without delay, of fossil fuels with clean energy sources.” With great gravity, he names the predictions of scientists that we have “less than 30 years” to drastically reduce greenhouse gas emissions in the atmosphere before we reach a turning point for catastrophic climate change. Reflecting the Vatican’s proposals in the “Journeying toward care of our common home” document, he suggests that businesses should “[exclude] from investments those companies that do not meet the parameters of integral ecology…”

We cannot continue to “squeeze the earth like an orange,” said Pope Francis. “The current economic system is unsustainable.” In conclusion, echoing his most recent encyclical, Fratelli Tutti, he called for a “renewed politics,” reminding us that, “love is political.” §

Faith in action: Read and share the document, “Journeying toward care of our common home,” the Vatican’s “how-to” guide for implementing Laudato Si’: http://bit.ly/LSHowTo.