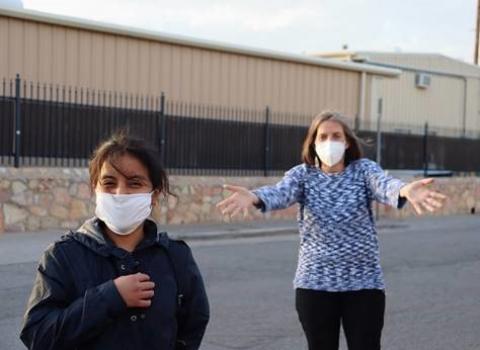 Maryknoll Lay Missioner Heidi Cerneka in El Paso, Texas, led a campaign to free an indigenous woman from Guatemala from immigration detention. This article was published in the November-December 2020 issue of NewsNotes.

On October 23, 2020, El Paso Matters, a digital newspaper serving the communities of El Paso and Ciudad Juarez, reported on the dire situation of an indigenous woman from Guatemala detained by Immigration and Customs Enforcement (ICE) in El Paso, Texas, despite having won her case for freedom three weeks earlier. The El Paso field office of ICE told local advocates that the decision was pending at ICE Headquarters in Washington, D.C.

Within 24 hours of the Maryknoll Office for Global Concerns emailing this action alert to missioners and supporters, many emails and calls were made – and América was free!

América is a strong and thoughtful person. Speaking in the Mayan language of Mam, América describes the culture of the nearly half a million Mam people who live in parts of Guatemala and Mexico as different from that of the majority of Guatemalans. “We do everything differently. We farm. We use nature and natural healers. We sometimes wear shoes. I am a weaver, and I weave huipiles, our traditional clothing.”

América won her freedom on October 5 but she is still not free. Proving one’s case is no easy task for anyone seeking asylum. América had to demonstrate a more than 50 percent likelihood that she will be persecuted if she returns to Guatemala.

The United States still tried to deport her. ICE has responded to the court’s decision by contacting consulates in three other countries to ask for permission to deport her to a third country.

ICE had the authority to release her, either due to the grant of ‘Withholding of Removal’ on October 5th, or under ICE supervision while they sort out the responses from other countries.

América had suffered enough. For asking for protection under U.S. asylum law, América had been detained for over six months in the El Paso ICE detention center where she contracted COVID-19, and despite all of that, battled to win her case in immigration court.

In the isolation of the detention center, surrounded by sickness, América suffered under the stress and strain of winning her case yet was still detained and with no information.

Then, on the evening of October 26, after a public outcry, the El Paso Detention Center released América!

América will most likely be able to stay with her sister in the United States. She was granted Withholding of Removal, which means she cannot be removed to Guatemala. Generally, a grant of Withholding of Removal means the person can stay in the United States until the court decides conditions have improved in her home country. One judge with more than 30 years on the bench told another client of mine that he has never seen that happen.

So, it is likely that América will not be deported to Guatemala, and will remain here in the United States.
Supposedly, in América’s case, the judge ordered her deported to any country but Guatemala. ICE asked three countries to receive her. Only two responded and refused. After 30 days, on November 4, this matter is scheduled to close and América will not need to worry about being deported to Mexico or to anywhere else.