Fordham Case Against Students for Justice in Palestine 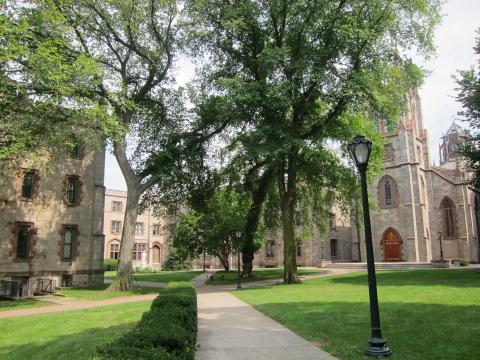 Professors and clergy speak out in support of students advocating for justice for Palestine. This article was published in the November-December 2020 issue of NewsNotes.

Maryknoll Father Jack Sullivan is one of four signatories on an Amicus Brief in support of the Fordham Students for Justice in Palestine (SJP) in their effort to be accepted by Fordham University as a recognized student club. In 2017, Fr. Sullivan also signed a letter from Catholic scholars and clergy to Fordham asking them to reconsider their decision to deny official recognition of Students for Justice in Palestine. Ultimately, a New York state judge ruled in SJP's favor, though Fordham appealed.

The organization Palestine Legal helped to secure signatures for an Amicus Brief to the court considering Fordham's appeal. The brief was filed in August 2020 with four signatures: Fr. Drew Christiansen, SJ and Adjunct Professor Eli McCarthy, both from Georgetown University, Fr. Rafael Garcia, SJ, director of The Encuentro Project and Fr. Jack Sullivan, MM. The position of the Maryknoll Office for Global Concerns is, regardless of whether or not one agrees with the policy positions of SJP, students have the right to express their beliefs (free speech) and the university should recognize the student club.

Earlier in the year, more than 100 Fordham faculty members signed a petition to the university president Rev. Joseph M. McShane, SJ urging the administration to rescind the university’s appeal of the August 2019 New York Supreme Court ruling that required  the university to recognize Fordham Lincoln Center’s chapter of SJP. “The faculty who signed the petition did not sign it because they are for SJP; they signed it because they disagree with the silencing of students on campus,” said Aseel Sawalha, associate professor of anthropology, co-director of Women, Gender and Sexuality studies, and current faculty adviser to SJP.

Quoting Arturo Sosa, Superior General of the Society of Jesus, in his 2018 address to the International Association of Jesuit Universities, the petition portrays the appeal as contradictory to Fordham’s Jesuit mission. The university “is a privileged space for exercising human freedom … to search and find the paths of social transformation,” Sosa said.

“The students of SJP fully believe they are on one such path of social transformation,” the petition read. “The university should support their search for their path, not block it.”