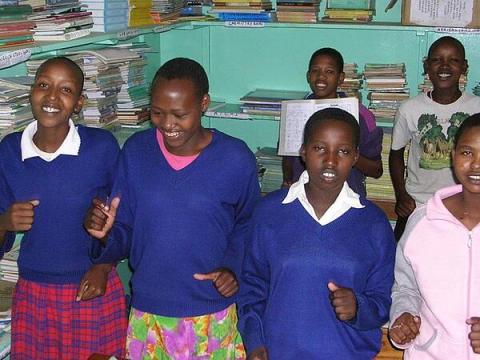 In honor of World Day Against Child Labor, Sr. Mary Vertucci, MM, describes her work at the Emusoi Centre in Tanzania as lifechanging for indigenous girls vulnerable to child marriage and exploitation. This article was published in the July-August 2021 issue of NewsNotes.

On a June 9 webinar jointly hosted by the Maryknoll Sisters, Fathers and Brothers, Lay Missioners, and the Maryknoll Office for Global Concerns, Sr. Mary Vertucci, MM, spoke about her work as the director of the Emusoi Centre in Tanzania, an educational center in rural Tanzania that provides pathways out of poverty for  indigenous Tanzanian girls.

The webinar was held in honor of the World Day Against Child Labor on June 12 and the United Nations’ decision to declare 2021 as the Year for the Elimination of Child Labor. While at the programs at the Emusoi Centre do not explicitly focus on combating child labor, Sr. Mary highlighted the ways in which rural girls’ education allows them opportunities beyond child marriage and grueling pastoral labor.

Sr. Mary founded the Emusoi Center in 1991 after 20 years of teaching in schools in Tanzania. In the early 1990s, she moved to the northeastern city of Arusha, an area heavily populated by people of the Maasai ethnic group. As she visited rural villages, Sr. Mary could see the challenges facing the Maasai people and especially young Maasai girls.

Sr. Mary explained that education is not prized among the pastoralist Maasai people, and it is particularly undervalued for young girls, who are most often married soon after puberty to older men who may already have several wives. Their lives after marriage are often difficult, what with early pregnancy and the expected domestic labor.

While access to education is growing in Tanzania, with public school fees abolished in the last decade, there are still numerous financial, structural, and cultural barriers to girls’ education. Primary school students must pass a national exam to attend secondary school, and often only those with high marks are able to attend. Uniforms and other gear must be purchased, placing financial obstacles to matriculation. Cultural obstacles, such as the Maasai traditions, present challenges as well.

The Emusoi Centre seeks to empower rural girls by addressing some of those barriers to education and opportunity outside the traditional child marriage. While it is not a formal school, it offers a year of remedial education between primary and secondary school that prepares the girls academically and socially for education in more modern settings. It also supports girls during secondary education and for two years following, guiding them as they pursue further educational and work opportunities.

“When you educate a girl, you change a community’s future,” says Sr. Mary. She explained that over time, the girls’ mothers, and even some of the fathers, have grown in appreciation for what the Emusoi Centre offers young women. Several of the Centre’s young women have gone on to excel in their careers, becoming, for example, the first female doctors of the Maasai community. Approximately 2000 girls have now been educated by the Centre.

In Tanzania, roughly a third of the country’s children are engaged in child labor. The government has worked to counter the lure of work for children in the gold and gemstone mines in Tanzania, as well as the cultural disincentives for education, but lasting solutions are elusive. Educational initiatives like those of the Emusoi Centre help provide pathways for children out of poverty and developmentally inappropriate work.

You can watch the recording of the webinar and find resources for taking action against child labor here: https://bit.ly/3xPSgFb

Also in honor of the World Day Against Child Labor, Sr. Marvie Misolas, MM, organized a virtual side event at the United Nations sponsored by the NGO Mining Working Group on June 18, “Unraveling Child Labor in the Mining Industry in the Congo Basin.” §

Faith in action: Learn more about child labor in the chocolate industry and learn what you can do to support fair trade labor: https://bit.ly/3xPSgFb