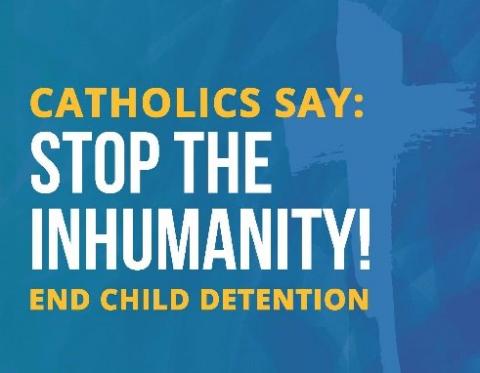 Please join us for our second national, prayerful direct action calling for humane treatment of immigrant children, this time in Newark, New Jersey, on Wednesday, September 4 at 10am.

Cardinal Joseph W. Tobin of Newark will join us as we pray and march from St. Mary’s Church to a Federal ICE Office in Newark, where some demonstrators will offer prayerful nonviolent civil disobedience.

Watch the event live on Facebook. It will be live-streaming from Newark from about 10am-12pm EST.

Raise your voice and say: Stop the Inhumanity!

I am a person of faith and I am calling to demand that [Senator ____ ] [President Trump] immediately end the unjust and immoral practice of detaining children and families. Family is sacred. It's the cornerstone of our communities. We can and must remain a country that provides refuge for children and families fleeing violence and persecution. Thank you.

If the White House line is busy, don't give up!

Too far away? Use our Prayer Service from our action on July 18th to organize your own prayer vigil.  Print our Protest Signs and Photos of Children who have died in immigrant detention since December 2018.

We launched the campaign after we were shocked by images in a recent Department of Homeland Security's inspector general's report showing immigrant and refugee children detained in cages, separated from family members, and living in unsanitary, unhealthy conditions. The faith community cries out against this inhumane treatment of children, not only as a violation of human dignity and rights, but also as contrary to religious teachings and the sacred call to care for people who are most at risk, especially children.

Our first Catholic Day of Action for Immigrant Children was held in Washington D.C. on July 18, 2019. Our second action is in Newark on September 4. Our third and final action will be held in El Paso, Texas in October 2019.