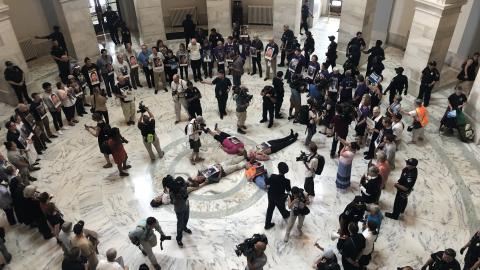 Dan Moriarty of the Maryknoll Office for Global Concerns joined more than 70 Catholics leaders in a prayer vigil and nonviolent civil disobedience at the U.S. Capitol on July 18, 2019, in an effort to put pressure on Congress and the presidential administration to end the immoral and inhumane practice of detaining immigrant children.

I participated in the Catholic Day of Action for Immigrant Children in Washington, D.C. as a representative of the Maryknoll Office of Global Concerns, a collaborative justice and peace advocacy office representing Maryknoll missioners around the world, Sisters, Lay Missioners, and Fathers and Brothers.  But I also participated as a husband and father of two children.

Watch a 6-minute video of the action

The Catholic Day of Action for Immigrant Children brought together more than 200 Catholic sisters, priests, brothers and lay Catholic advocates, who sang, prayed, and chanted as they demanded an end to the immoral and inhumane practice of detaining immigrant children.

In response to the images in a recent Department of Homeland Security's inspector general's report showing immigrant and refugee children detained in cages, separated from family members, and living in unsanitary, unhealthy conditions, the Maryknoll Office for Global Concerns and thirteen other national Catholic organizations planned the event to be the beginning of a campaign in which Catholic leaders are increasing their willingness to take significant risks as an act of faithful resistance for justice for our immigrant, refugee, and asylum-seeking brothers and sisters, especially children.

After a prayer vigil on the U.S. Capitol Building lawn, which included messages of support from seven U.S. bishops, we moved inside of a congressional office building to continue our prayer and singing, and enable 72 of us to risk arrest with an act of nonviolent civil disobedience.

We remember Carlos and the other children who have died in U.S. custody. 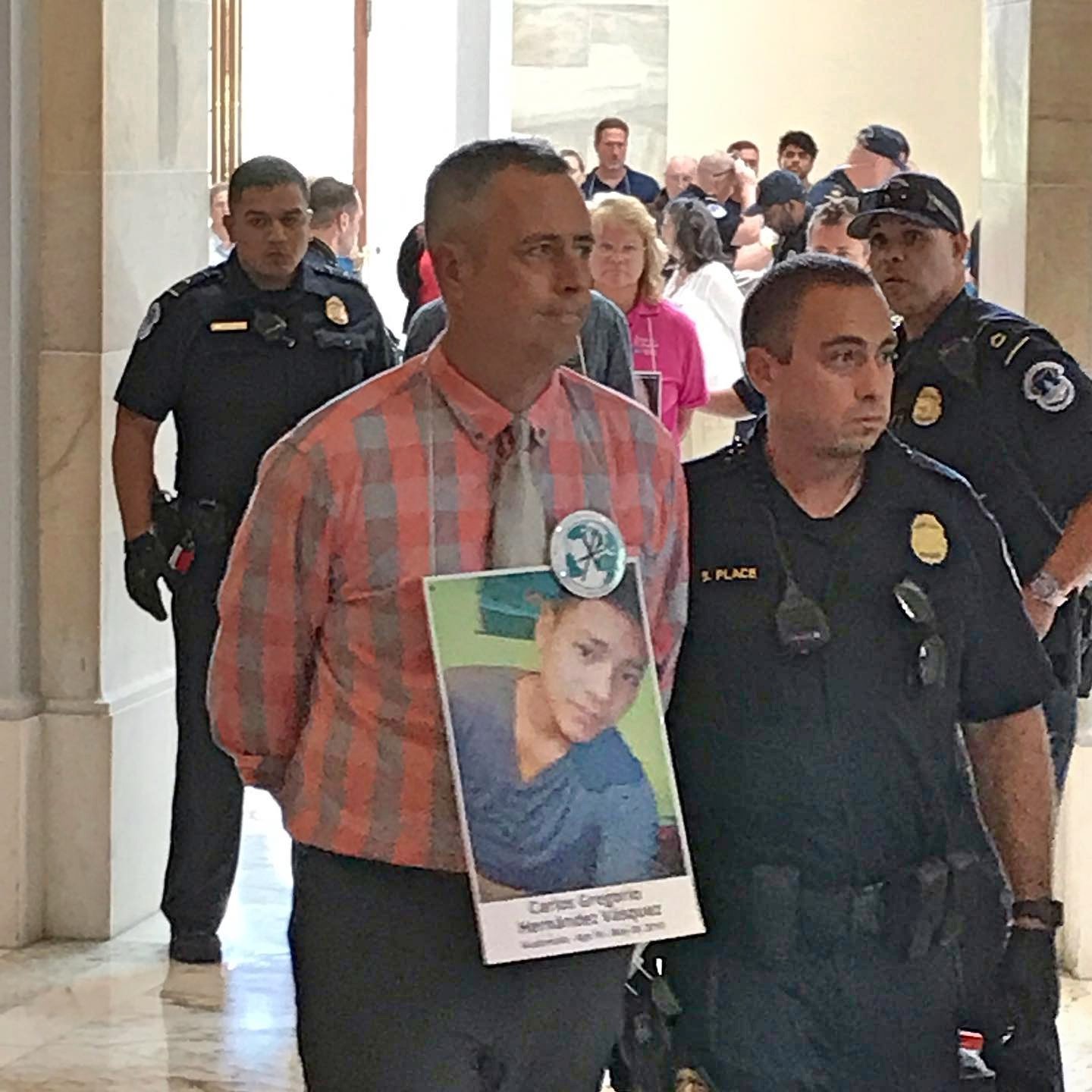 As I and four other protestors (two Sisters and two lay Catholics) lay on the floor of the Russell Senate Office Building Rotunda, joining our bodies in the shape of the cross, and nearly 70 others encircled us in prayer and singing, I held on my chest a photo of Carlos Gregorio Hernandez Vasquez, a 16-year-old boy from Guatemala who died in U.S. Customs and Border Protection custody in May. He looked strikingly like my own 16-year-old son. Like my son, he loved playing music, and soccer, and taking care of his brother. They could have been friends. Goyito, as his family called him, could have been my son. As we demonstrators prayed the rosary, sang hymns and listened to the stories of these children's lives – vivid present-day illustrations of the Sorrowful Mysteries – I prayed in gratitude for my own family and in repentance for my complicity in Goyito’s death and the suffering of so many other migrant families.

People in the crowd carried photos of Carlos and the other children we know of who have died while held in U.S. custody on the souther border, or shortly after their release, since December: Jakelin Caal Maquin (age 7, from Guatemala), Felipe Gómez Alonzo (age 8, from Guatemala), Juan de León Gutiérrez (age 16, from Guatemala), Darlyn Cristabel Cordova-Valle (age 10, from El Salvador), Wilmer Josué Ramírez Vásquez, (age 2, from Guatemala), Mariee Juarez (age 1, from Guatemala). Before December, no child had died in U.S. Customs and Border Protection custody in more than a decade, according to the Department of Homeland Security.

During our action, Catholics around the country called the White House comment line to tell the President to end child detention. (Keep calling! Follow these instructions.) Also, Senator Tim Kaine of Virginia, a Catholic, visited us to offer his support. He joined Senators Jeff Merkley and Chuck Schumer in introducing new legislation, the Stop Cruelty of Migrant Children Act, on July 11.

Maryknoll missioners go to other lands, crossing oceans and borders and cultural barriers, to build solidarity with God’s people. In particular, we follow Christ’s exhortation to go out to the margins, to offer love and be transformed with the impoverished, the sick, the oppressed and marginalized, and to see Christ in eachother. Offering kindness, welcome, and mercy to the stranger is one of the main ways Jesus taught us to love Him. Respect for the dignity of migrants, especially children and families, is central to our Catholic identity and the baptismal call to mission.

There is an icon, the Christ of Maryknoll, in which Jesus, showing the wounds in his hands, looks into the eyes of the viewer through a barbed-wire fence, inviting us to wonder: is he being detained, or are we? Either way, the message is clear: Jesus calls us to traverse borders and concentration camp wires, to stand with the detained and the excluded.

The word privilege gets used a lot these days, so to say it was a privilege to participate in the Catholic Day of Action for Immigrant Children may sound like a pro-forma kind of way of simply saying it was a good thing to do. It’s more than that. It was a true privilege in several ways.

It was a privilege to be free, in my own country, with my own family waiting at home, not separated, not in cages, and be able to join with other Catholics at the Capitol in making our voice heard. As a result of US border policy, too many families do not enjoy such privilege.

We came to share the Good News and speak truth to power. 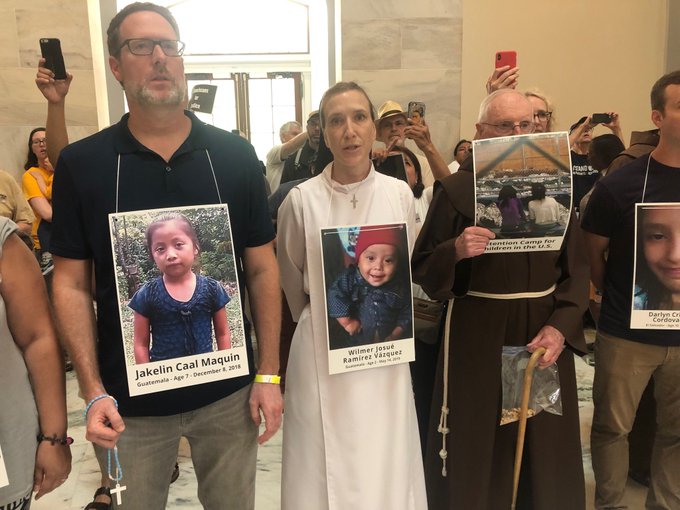 This action of civil disobedience was a privilege to live out what the Catholic Church does best: a prayerful, powerful use of symbol and ritual to communicate the Good News, and speak truth to power. We told the stories of children and families who’ve been separated, incarcerated, and died on the border. We prayed, we sang, we shared images. We were a powerful nonviolent witness, denouncing injustice and calling on our government to cease the separation of families, close the camps, pass comprehensive immigration reform, and address the root causes of migration and the role of the United States in fomenting the conditions that lead families to flee countries in Central America and around the world.

Photo: Demonstrators wear photos of children who have died in U.S. custody on the southern border at the Catholic Day of Action for Immigrant Children in the Russell Senate Office Rotunda on July 18, 2019. Credit: Faith in Public Life.

It was a privilege to participate in civil disobedience, to be arrested, to stand with detained families, as well as with Jesus and so many prophets who have disobeyed unjust legal systems. It was a privilege to represent Maryknoll with faithful Catholics from across the country. Seventy-two of us were arrested – some like myself, committing civil disobedience for the first time. As I looked around at everyone sitting together in the Capitol Police processing center, all in handcuffs, some in habits, some in their 80’s and 90’s, some new to this kind of activism and some inspiring movement veterans, I thought of the children in the camps, and Carlos and the others who have died, and realized, surely, this is the communion of saints. This is what it means to be Catholic.

This action is the beginning of a Catholic campaign to end child detention that will continue in the coming months, with more actions in Washington and at the southern border. I hope many more Catholics across the country will join us, or organize more actions, and discover for themselves the deep privilege of standing with our migrant sisters and brothers at this crucial time.

To join the campaign, fill out this form. To receive news about the campaign and upcoming actions, sign up to receive our email action alerts.