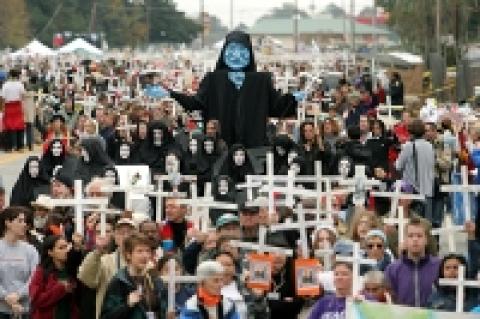 Sustainable pathways to peace and inclusive security (SPPS) is one of two overarching programs of the Maryknoll Office for Global Concerns (MOGC). (The other is Faith-Economy-Ecology.)

Following is the excerpt on SPPS from the MOGC plan:

Long range goal: To engage people of faith in building peace based on a concept of true and just community and economies of “enough.”

Background: People around the world are interconnected as never before as members of the earth community. Although increasingly evident ecological crises will ultimately necessitate dramatic shifts in patterns of globalization, our lives are tied together by electronic communications, the consequences of disease and lack of health care, malnutrition, inadequate education, the effects of climate change and extremist ideologies. The response of the United States, other governments and multilateral bodies to current political, economic, social and ecological crises must take this interconnectedness into account, welcome it and build on its many positive possibilities. Placing greater emphasis on cooperative engagement toward just peace and inclusive global security rather than national security could encourage U.S. Americans to appreciate the diversity of gifts from other nations and cultures. The U.S. posture in our world should be cooperative and more trusting.

To the pursuit of just peace and inclusive global security, Maryknoll brings many useful lessons. Maryknoll missioners have traditionally inculturated in communities abroad. They have learned to communicate through new languages and to appreciate new cultural experiences. They have seen extreme poverty and violence, but have also discovered new riches in honored relationships and respected traditions. Some have gone overseas with a zeal to produce and accomplish great things, and have adapted to different rhythms and simpler ways of life. They have brought with them U.S. American norms, and have bumped up against different but refreshing values. In short, they have discovered something that could help alleviate some of our greatest fears of “the other.”

This kind of experience is critical to understanding other countries and cultures, and can offer a key to reinvigorating U.S. foreign policy through a deeper respect for others. As constituents, Maryknoll missioners – working in partnership with the Maryknoll Office for Global Concerns and with other people of faith – can act as agents of change by encouraging U.S. leaders to sustain their commitment to a more cooperative and respectful approach to U.S. relationships in the world. It is time to replace time-worn, discredited policies that emphasize national security over-against the well-being of the whole earth community with a new cooperative attitude and a commitment to promote on what constitutes lasting peace and inclusive security for all.