Trump Administration’s Latest Actions on Central America Will Fuel Migration, Not Address It 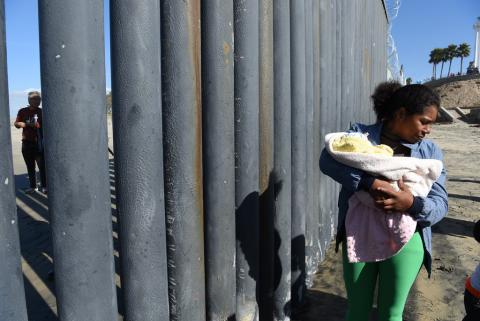 The Maryknoll Office for Global Concerns joins over 40 U.S.-based faith, human rights, foreign policy, humanitarian, immigrant rights and border-based civil society organizations in a statement to express deep concern over the Trump Administration’s latest actions on Central America including the wholesale cutoffs of assistance to Guatemala, Honduras, and El Salvador.

The full statement reads as follows and is available for download here:

We express our deep concern about the Trump Administration’s latest actions regarding the Northern Triangle countries of Central America (NTCA)–Guatemala, Honduras, and El Salvador. In addition to threats of closing the U.S.-Mexico border and ongoing illegal actions to deny asylum seekers of their right to seek protection along the border, the administration has announced wholesale cutoffs of assistance to Guatemala, Honduras, and El Salvador. Far from alleviating the humanitarian crisis, if implemented, these cuts would only fuel the refugee crisis from the region.

Targeting government officials and other individuals with specific sanctions for human rights abuses and acts of corruption and withholding security assistance are important levers that the State Department should utilize to send a message to governments that corruption and human rights abuses will not be tolerated. Human rights and anti-corruption conditions on aid to Central America should also be enforced. Specifically, some aid to central governments—in this case, Honduras and Guatemala—should be withheld due to failure to meet those conditions.

However, the administration’s proposal to cut off programming that specifically addresses the root causes of migration—much of which is implemented via international organizations, humanitarian aid organizations, local governments, and civil society organizations—is counterproductive and misguided. It does not reflect the ongoing humanitarian crisis on the ground and will further increase forced migration. The aid that would be cut off includes violence prevention and response, poverty alleviation, and programs to address corruption, strengthen human rights, and promote the rule of law.

Contrary to the administration’s rhetoric, implementing this assistance carefully, and in close collaboration and monitoring with civil society organizations and local communities, can lead to safety and opportunities for individuals in the short term, and yield results in the long term.

Cutting off assistance also sends the message that the governments of the region should prevent their citizens from leaving, even when they are fleeing danger and seeking international protection. Under international law, every individual has the right to freedom of movement and the right to leave their home country to seek protection from persecution.

Instead of this misguided approach, the United States should use a comprehensive approach to address the root causes of forced migration, with well-targeted assistance focusing on reducing structural poverty, promoting decent work, addressing gang and gender-based violence, combating corruption, and strengthening human rights and the rule of law in each of the three countries. Addressing the root causes of migration requires a long-term commitment by the governments of the region, including the United States.

This aid cutoff announcement follows that of a new regional compact between the Department of Homeland Security (DHS) and the three Central American governments. The compact was signed at the Honduran Security Ministry last week by DHS Secretary Kirstjen Nielsen and the security ministers of the three countries. Though the exact text of the memorandum has not yet been published, the initial announcement referenced proposals to strengthen border enforcement, expand information-sharing, and create joint police operations in the region. We are also concerned about this announcement, which appears to be another part of the administration’s erroneous approach.

In particular, we are concerned by the State Department’s absence at this meeting and in the future implementation of this agreement. The State Department, not DHS, is the U.S. government’s foreign policy arm. Moreover, by holding the meeting at the Honduran Ministry of Security, the United States is sending the messages that it supports a security-only approach to addressing the root causes of migration from the NTCA countries—and that government corruption doesn’t matter. We are also concerned by the lack of consultation with civil society organizations in the United States and the region on the regional compact, which to date has not been made public.

Proposals to increase intelligence sharing between the U.S. and Central American governments and to strengthen border enforcement in the region must not interfere with an individual’s human right to seek international protection. Supporting increased joint security operations in the NTCA, given the record of human rights violations that security and law enforcement agencies have in the region will do nothing to stem the causes of migration and can lead to further abuses against human rights defenders. Finally, efforts to implement in-country refugee processing should be instituted not as a replacement for ensuring access to asylum at the U.S.- Mexico border, but rather in addition to it.

We urge the Trump Administration to reconsider its proposal to cut anti-corruption, anti-poverty, and anti-violence assistance to Central America. Assistance is a crucial part of U.S. diplomacy and an important piece of addressing the root causes of the ongoing forced migration and displacement. However, it must be done from a rights-based approach. Transparency and accountability should be ensured as well as active consultation with a diverse group of civil society actors in the design and implementation of aid initiatives. We urge members of Congress to ensure that this assistance is fully implemented according to law.

Cuts to assistance should not be based on whims to pressure governments to deter their citizens from leaving their home countries, as they have a right to seek safety. The administration’s proposals, if implemented, will only fuel greater instability and more migration from the Northern Triangle region.