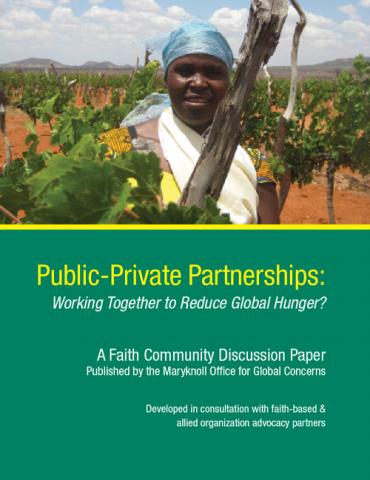 During its May 2012 meeting, the Group of Eight (G8) – the U.S., the United Kingdom, France, Germany, Italy, Japan, Canada and Russia -- announced a New Alliance for Food Security and Nutrition, in which private companies committed to invest $3 billion over 10 years to increase agricultural production in less industrialized countries. This new alliance will include some of the major seed and fertilizer companies like Monsanto and Yara International which intend not only to invest resources to advance G8 countries’ global development goals, but to expand their own overseas markets, and advance their own corporate interests – potentially creating a tension between development and market goals.

The New Alliance is indicative of a U.S. policy shift that relies on the private sector to drive agricultural development – a shift that has been occurring over a number of years mainly through a series of public-private partnerships. Maryknoll has been watching this trend and convening discussions among faith based and allied organizations who are concerned whether and how such programs can truly reduce hunger and poverty and strengthen the human rights to food and water, when they also seek to advance the interests of the corporations behind them.

Though the private sector has an important role to play in global food security, the Maryknoll discussion paper “Public-private partnerships: Working together to reduce global hunger” released today highlights the principles outlined by faith groups and allied organizations that give public-private partnerships the best chance of success, while detailing the historical trends that led to the New Alliance announcement in May. It is our hope that organizations use these principles when discerning whether to enter into these partnerships or when scrutinizing New Alliance sponsored projects.

Use the link below to open “Public-private partnerships: Working together to reduce global hunger.”