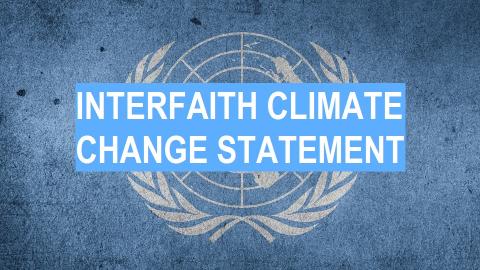 On April 18, at a multi-faith ceremony with Buddhist chants, Zoroastrian prayers, and Sikh drumming at the Church Center for the United Nations, Ambassador Mogens Lykketoft, president of the UN General Assembly, received the Interfaith Climate Change Statement to World Leaders signed by 270 high-level religious leaders, 4970 individuals and 176 religious groups from around the world.  The statement is a call to action from the world's faiths.

The Interfaith Climate Change Statement to World Leaders (2016) outlines religious leaders and faith communities' positive judgement of the adopted Paris Agreement and urges for its prompt signature and ratification by governments so that it can come into force as soon as possible. It also insists that there is a significant increase in the current levels of ambition relating to emission reductions, financial flows, adaptation, loss and damage and a swift phase out of fossil fuel subsidies - so as to keep temperatures within reach of 1.5C.

The statement also serves to renew the strong commitment of the faith community to remain active in defining the moral responsibility to care for the Earth and encourages it own communities to reduce emissions and to divest and reinvest in renewables.