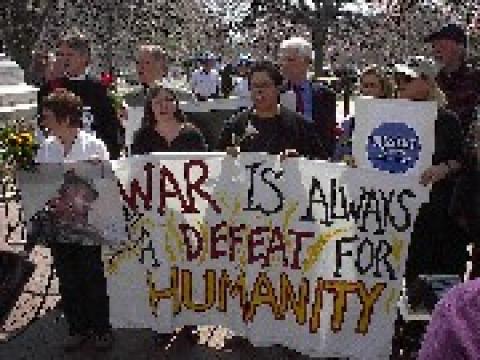 The following statement was published in 2003, as the U.S. grew closer to military action against Iraq. Updated versions were published in 2005 and 2008. Photo from March 26, 2003 civil disobedience action at the White House.

Maryknoll missioners live and work in communities around the world torn apart by conflict and war. We know too well the intense suffering and destruction that war brings. As followers of Jesus we are committed personally and institutionally to reverence and affirm the dignity of each person and the whole community of life of which we are a part. We seek to participate actively in the transformation of the world, pursuing social justice, the integrity of creation, and – with even greater intensity in these times - peace. We believe that as a global community, particularly in the form of the United Nations, we must respond to tyranny and terrorism, injustice and repression with active, nonviolent resistance, not war.

We cry out unequivocally in opposition to war on Iraq.

The Holy Father Pope John Paul II said, “Choices need to be made so that humanity can still have a future. Therefore, the peoples of the earth and their leaders must sometimes have the courage to say ‘No’ … No to war! War is not always inevitable. It is a defeat for humanity. International law, honest dialogue, solidarity between States, the noble exercise of diplomacy; these are methods worthy of individuals and nations in resolving their differences.” (Address to the Diplomatic Corps, January 13, 2003)

With millions of others, Maryknoll missioners have prayed and fasted for peace; we have supported alternatives to military action; we have vocally and visibly opposed the U.S. government’s unwavering march toward war on Iraq. We reiterate and affirm the words of Cardinal Angelo Sodano, the Vatican Secretary of State: “We are against the war. That is a moral position.” (January 29, 2003)

As Maryknollers we honor the many cultures around the world that have welcomed us; we treasure their wisdom and believe that no one country, even one with enormous military might, has the right to destroy those cultures or negate that wisdom. Instead of military action to establish in the Middle East and Central Asia a “more stable and open” political environment that is friendly to U.S. interests, we believe the U.S. should commit itself to