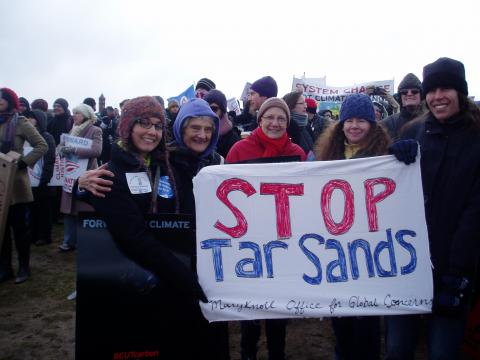 The Maryknoll Office for Global Concerns is grateful for President Obama’s rejection of the permit to pump tar sands oil through the U.S. heartland via the Keystone XL pipeline. It has been a long struggle, but the call to care for the earth by turning away from fossil fuels is being heard, thanks to thousands of people of faith and conscientious citizens who stood up and raised their voices in defense of the environment.

“We need a conversation that includes everyone, since the environmental challenge we are undergoing, and its human roots, concern and affect us all,” Pope Francis says in Laudato Si’ (14). We celebrate the diverse coalition – indigenous communities from Canada, farmers in Nebraska, and people of faith – who came together to respond to the cry of the earth under the threat of the Keystone XL pipeline.

We stand with Pope Francis in calling for an ecological conversion away from a lifestyle fueled by fossil fuels and toward investment in renewable energy. “There is an urgent need to develop policies so that, in the next few years, the emission of carbon dioxide and other highly polluting gases can be drastically reduced, for example, substituting for fossil fuels and developing sources of renewable energy.” (Laudato Si’ 26)

When the Canadian energy company TransCanada first applied for a presidential permit that would enable the construction of a new tar sands pipeline running from Alberta to Nebraska, the request was rejected by President Obama on the grounds that not enough time was given to complete a proper evaluation. Despite the U.S. State Department’s finding that the environmental impact of the proposed pipeline would be negligible, Maryknoll missioners continued to stand with indigenous communities in Canada, farmers in Nebraska, and people of conscience in speaking out about the facts – that tar sands are 17 percent more carbon intensive than average standard crude oil; and that the potential spills due to leaks in the pipeline would be nearly impossible to clean up because, unlike conventional oil, tar sands sink when spilled in waterways.

Chloe Schwabe, Faith Economy Ecology Project Coordinator said: “We celebrate President Obama’s rejection of the Canadian oil company TransCanada’s permit application to construct the Keystone XL pipeline. This is an important shift in U.S. energy policy away from dirty, resource intensive energy, to clean and renewable energy. Our faith calls us to protect creation and to seek a lifestyle that is in right relationship with God, with our neighbor, and with the earth itself.

“Pope Francis, in his encyclical Laudato Si’, highlights the particular vulnerability of indigenous communities to environmental degradation. Alberta tar sands are not only dirty, but also destructive to the land, ecosystems, and culture and health of First Nations peoples in Canada. Maryknoll missioners stand in solidarity with the Canadian First Nation peoples just as we do with communities in Asia, Africa, and Latin America affected by climate change.”