Historic Climate Deal a Step in the Right Direction 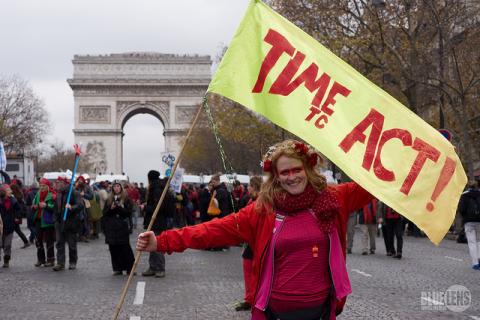 On December 12, world leaders concluded final negotiations of the climate agreement in Paris. Chloe Schwabe, Faith Economy Ecology Project Coordinator, was an official observer at the two-week conference. The following is her statement.

“Maryknoll missioners serve communities facing the devastating impacts of climate change, from the Philippines to Bangladesh to Tanzania to El Salvador. Pope Francis has invited us all to make climate action a moral priority. Francis urged world leaders to come together and dialogue at the Paris Climate Summit, and to hear the cry of the earth and the cry of the poor.

“We celebrate the birth of a new global solidarity on climate change in Paris.  For the first time, 195 nations agreed that the world is in a climate crisis and that we must act now to slow global temperature rise. This agreement puts us on a path to finding solutions to save lives and significantly diminish the threat of climate change for the world’s poor and God’s whole creation. The Paris agreement is an important first step.

“The Paris agreement was possible because people across the United States and around the world raised their voices, calling for climate action and the end of the fossil fuel era. Many people are doing what they can to change their lifestyles and reduce their use of fossil fuels – but governments must also act if we are to succeed in saving our planet.  In Paris, world governments committed to actions that set us on the right path.

“We praise the vulnerable nations that led the successful effort to get countries to commit to ‘holding the global average increase in temperature to well below two degrees Celsius, and to pursu[ing] efforts to limit the temperature increase to 1.5 degrees Celsius above pre-industrial levels.’ This is a significant achievement that resets the momentum of the global climate movement. The only way to achieve this ambitious goal is for countries to keep their commitments to transition from fossil fuels to 100 percent renewable energy as quickly as possible.

Justice for the most vulnerable

“We have a moral responsibility to ‘the least of these.’ We recognize that the countries that pollute the least face the greatest burden of climate change. We joined a multitude of faith-based and civil society groups in efforts to include the protection of human rights in the agreement, to ensure no one is left behind. This agreement recognizes that human rights are fundamental to any response to the climate crisis. We see too many communities facing challenges to their human dignity and territory from mitigation projects such as hydroelectric dams, biofuels, and forest protection projects (including Reduction in Emissions from Deforestation and Degradation+).

“This agreement sends a signal to uphold the human dignity and worth of indigenous people, women, workers, and other vulnerable populations during projects related to mitigation, adaptation, or loss and damage. We will continue to fight for even stronger human rights protections in all climate-related projects.

“It is an important moral marker that the Paris agreement recognizes the real possibility of rising sea levels submerging small island nations and coastline communities and that the agreement includes a process to address such loss and damage. Countries, including the United States, can dramatically reduce loss and damage from climate change if they increase mitigation efforts and decrease their greenhouse gas emissions in the coming years and decade.

“The Paris agreement is a positive response to the moral call for a safe climate for future generations of people and all of creation. It is a good beginning, but just the beginning. There is still a long road ahead to ensure that climate action, when applied, is equitable, just, and fair.

“We will continue to share the experience of Maryknoll missioners and the communities they serve to ensure that the United States and other world leaders meet their commitments in the Paris agreement. And we will advocate for increasing ambition in future climate agreements. We will work to transform our throwaway culture to a culture of care, and to make sure the transformation is fair, just, and equitable for all people and the earth.”