Support for Justice for Family of Anastasio Hernández Rojas 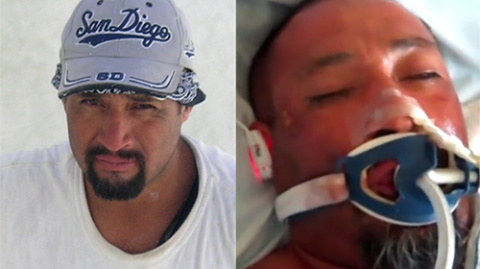 The Maryknoll Office for Global Concerns joined more than 200 organizations in a letter of support for the family members of Anastasio Hernandez Rojas, who go before the Inter-American Commission on Human Rights (IACHR) to seek accountability from the U.S. Customs and Border Protection for the brutal murder of their relative.

We, the undersigned 208 organizations, write in support of the family of Anastasio Hernández Rojas in their petition before the Inter-American Commission on Human Rights (IACHR) in their claim that the United States has historically and systemically used the power of the state to kill community members, cover it up, and deny families access to justice. Anastasio is one of thousands that have been killed by law enforcement in the United States with near total impunity in large part because the standards for use of force are inadequate and the mechanisms for accountability are weak. This disproportionately affects Black and Brown men, women, and children whose human rights have been violated and whose lives continue to be at risk because of the unchecked power of the state.

We stand with the family of Anastasio, who was brutally killed in 2010 in San Ysidro, California by agents of the nation’s largest law enforcement agency, U.S. Customs and Border Protection (CBP). Since Anastasio’s death, nearly 250 people have died in encounters with CBP, the majority of whom are Black and Brown people from countries including Angola, Brazil, Colombia, Cuba, the Democratic Republic of the Congo, Ecuador, El Salvador, Guatemala, Haiti, Honduras, Mexico, Nicaragua, Venezuela, and the United States. These deaths are some of the thousands of deaths that have occurred year over year since 1924, when the United States established its first border enforcement agency, the U.S. Border Patrol, which is now part of CBP. In the near century that the United States has had border agents, few border agents have been charged and zero agents — none — have been convicted for any of the thousands of lives taken using the power of the state.

As the Anastasio case points out, the abuse and impunity in the United States are endemic to a justice system designed to protect law enforcement, not the communities they are sworn to serve. The Petitioner’s Additional Observations detail that on May 28, 2010, more than a dozen border agents surrounded Anastasio while he was handcuffed, hog-tied, and in the prone position on the ground. They beat him, shot him repeatedly with a Taser, and then put him into a positional asphyxiation position with an agent leaning on top of him until he stopped breathing. These acts constitute torture. The impunity began with border agents dispersing witnesses, erasing cell phone videos, intervening in the autopsy and investigative interviews, destroying government video, altering government documents, mishandling evidence, and acting at every turn to obstruct justice.

This obstruction was not an aberration, but rather, the norm for CBP, which has illegally operated cover-up units called ‘Critical Incident Teams’ for decades outside of public view. The Southern Border Communities Coalition (SBCC) revealed the existence of these teams to the public in a letter to the U.S. Congress in October 2021, which prompted several government investigations, currently ongoing, and the elimination of the teams. But the revelations about the cover-up units have not resulted in any accountability. The U.S. government seems poised to absolve border agents of past misconduct and to permit their involvement in future investigations of use of force.

According to the Washington Post, police killings claim the lives of over a thousand people every year in the United States (not including deaths at the hands of border agents). Black and Brown community members are killed at much higher rates than anyone else. They include the high-profile killings of Eric Garner, Tamir Rice, Breonna Taylor, George Floyd and many more. Few officers are ever charged for unjustified killings, and even fewer are convicted because access to justice is fraught with obstacles. The greatest obstacle is how excessive force is defined in the United States. U.S. law condones as “objectively reasonable” force that amounts to torture or excessive use of force under international standards.’ Until and unless the United States’ use-of-force standard changes, the killings by border agents, police, and other law enforcement will continue, and justice will be denied in all but the rare few cases.

The time is now for the IACHR to weigh in.

This is a moment of national reckoning for law enforcement in the United States. Talk of reform permeates the U.S. Congress, state legislatures, city halls, and public square, but meaningful accountability mechanisms have yet to appear. That must change. The unabated violence by law enforcement undermines our safety, our humanity, and civilian control over state power. An examination now by the IACHR of the use-of-force standards and accountability mechanisms at play in the Anastasio case and in effect throughout the United States is timely and could help move us forward to protect human rights.

In border communities, use of force by border agents is on the rise. According to CBP’s own data comparing 2019 and 2022, use-of-force incidents have risen from 592 to 876, even while assaults on officers, which agents claim justifies the force they use, have fallen from 484 to 462. The rise in violence comes at a time when agents at CBP are critical of attempts at reforms, they operate secret social media groups where they make xenophobic, sexist, and racist jokes with few consequences, and the former head of Border Patrol openly threatens rape in response to media reports about his role in the abuse and impunity at the heart of the Anastasio case.

In the days after Anastasio’s life was taken, while the family was still mourning and the community was reeling, the Border Patrol union openly tweeted, “Lesson learned: Don’t fight with Border Patrol,” and “We don’t fight fair, we fight to win.” This is the attitude of an agency then and now, an attitude that reverberates throughout CBP. If this is the unchecked behavior of the nation’s largest law enforcement agency, what can we expect from other agencies? What can we expect from law enforcement in other countries?

Now is the moment to hold CBP and other law enforcement in the United States accountable, and point to the reforms that will open a new chapter, one where human rights and life are paramount and protected at all times for all people. We thank the IACHR Commissioners and Executive Secretary for your consideration of our letter in your deliberations.

Signatories are listed on the PDF

Image from the ACLU article here.