Preventing a Humanitarian Disaster in Afghanistan 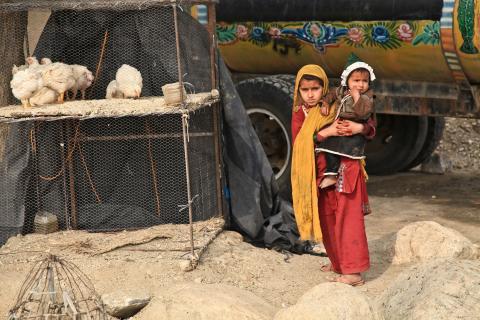 The Maryknoll Office for Global Concerns joined a coalition of 16 organizations calling on President Joe Biden to act now to prevent humanitarian disaster in Afghanistan.

Millions more Afghans will descend into abject poverty this winter and thousands will starve to death unless swift action is taken by the United States and our international partners. Afghans are already running out of food and the U.N. World Food Programme’s director for Afghanistan projected that its economy will collapse in a “matter of weeks.”

Afghanistan’s economy was in dire straits prior to the collapse of the Afghan government. In 2020, tax revenue declined by 7.6% and urban poverty increased to 47.6 % — roughly equal to the country’s rural poverty rate. Afghanistan is a classic rentier state and grants finance approximately 75% of public spending. Domestic revenues fell from 14.1% of the GDP in 2019 to 11.4 % in 2020 with a trade deficit of 27.6% of the GDP. Since the Taliban takeover in August, inflation is skyrocketing, particularly the cost of food. Even Afghans with savings in the bank are unable to access those savings consistently with reports of banks and other institutions running out of cash. This is no slow moving train wreck but one that is already off the rails. The point of no return is just weeks away for millions of Afghans caught between two decades of war and the brutalities of Taliban rule.

The following measures will ensure that U.S. humanitarian aid and international assistance reach vulnerable Afghans before the clock runs out.

First, the Office of Foreign Assets Control should grant a more expansive general license exempting aid organizations from sanctions. The U.S. government should make it abundantly clear to these organizations that providing food and healthcare to Afghans will not place them in violation of U.S. laws. Other creative options include direct payments or cash transfers to vulnerable Afghans. Moreover, critical needs for the Afghan people go beyond essential life-saving support. Programs that provide conflict resolution skills, human rights monitoring, and other fundamental elements of a safe and stable society are needed.

Second, Washington should focus humanitarian aid on Afghanistan’s healthcare facilities, some of which have closed due to lack of funding. Lack of access to healthcare disproportionately affects women, and Afghanistan’s medical clinics are one of the few settings where the Taliban have demonstrated some willingness to allow women to work. Third, the United States should continue funding Afghan schools and higher education, while also calling on the Taliban to allow girls and women to access all levels of education.

Finally, the United States should begin to unconditionally release portions of Da Afghanistan Bank’s (Afghanistan Central Bank) $9.5 billion reserves, much of which is held in the U.S. Federal Reserve, to insert liquidity into Afghanistan’s banking system and prevent an economic collapse. While portions of the frozen funds should be released incrementally and unconditionally to prevent the economy from collapsing, the United States could also offer to release all remaining funds in exchange for actions by the Taliban to live up to their stated commitment to permit access to education for Afghan girls and to prevent any use of territory to launch terrorist attacks on other nations.

Some may argue that helping the Afghan people will sometimes inadvertently or indirectly benefit the Taliban as their de facto government. This potential reality must be viewed against the imperative of saving lives and preventing unnecessary suffering. An independent auditor could potentially provide oversight of the funds as well. Crippling sanctions, low cash reserves, and economic pain will neither force the Taliban to fundamentally change their positions nor inspire war-weary Afghans to overthrow them. It will only cause suffering and death to everyday Afghans. Cutting off humanitarian aid or needed economic resources through sanctions will not succeed in creating sustainable regime change in Afghanistan when our 20 years of war and occupation failed to do so. It will only punish Afghan civilians for our disapproval of their de facto government.

We should not cede diplomatic engagement in Afghanistan exclusively to China, Russia, or our partners in Europe to carry out alone. The Chargé d’Affaires of the United Kingdom’s Mission to Afghanistan recently joined Prime Minister Boris Johnson’s representative to Afghanistan to meet with the Taliban in Kabul. We should also support and engage with the United Nations, international governmental organizations, and prominent NGOs with capacity inside Afghanistan to distribute aid. The United States should also have diplomatic representation inside Afghanistan, even if it falls short of a permanent diplomatic mission for the time being.

The collapse of the Afghan economy and starvation of its people is a preventable disaster. Mr. President, we stand ready and willing to support your efforts to aid the Afghan people. Time is of the essence.