NGOs call for Loss and Damage Action at COP27 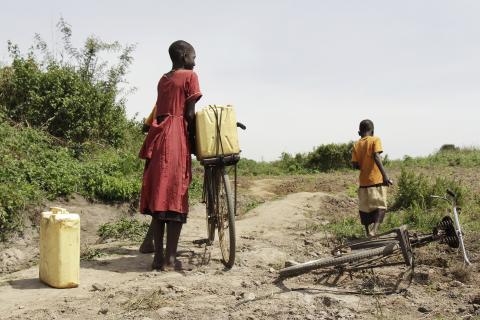 International humanitarian organizations urge world leaders at COP27 to follow through on their commitment to fund loss and damage responses in climate vulnerable countries.

We, the undersigned international non-governmental organizations (INGOs) and InterAction, the largest alliance of international NGOs in the United States, operate on the frontlines with some of the most vulnerable communities worldwide.

These communities are experiencing the most severe climate-induced disasters, despite having done the least to cause them. We are witnessing increasingly severe impacts, including the loss of lives, detrimental effects on food systems and livelihoods, loss of water resources, and destruction of homes and critical infrastructure.

So far this year, a catastrophic monsoon season in Pakistan has resulted in over 1,500 deaths and the loss of over two million homes and over one million livestock. The Horn of Africa is facing one of the worst droughts in 40 years, which is already affecting over 36 million people and is projected to put 23 to 26 million people in acute food insecurity by February 2023. Furthermore, deadly heat waves in Africa, Asia, Australia, Europe, South America, and North America, and intense wildfire seasons in North America and Eurasia, destroyed entire communities this year.

Despite efforts and progress made in mitigating and adapting to climate-induced disasters, we have reached a point where the loss and damage from some of these are beyond our capacity to mitigate or adapt. Vulnerable communities should not be left with the burden of addressing and paying for this loss and damage alone. This burden should be additionally borne by developed nations—the ones who are responsible for the majority of greenhouse gas emissions that have resulted in the climate crisis.

The development and humanitarian assistance that donor nations already provide should not be seen as the source of funding to address these severe and insoluble climate impacts.

While the United Nations Framework Convention on Climate Change (UNFCCC) process has an existing mechanism aimed at averting, minimizing, and addressing climate-induced loss and damage and a network to catalyze technical assistance (the Santiago Network), very little progress has been made to establish a Finance Facility for Loss and Damage.

Last year, at COP26, world leaders failed to agree on a plan to establish a Loss and Damage Facility and instead compromised by establishing the Glasgow Dialogue.

Another year has passed without a clear plan for financing loss and damage, which means another year of frontline communities losing their lives, homes, communities, and livelihoods. COP27 is the time to move from dialogue to action. We urge you to work together in Sharm El Sheikh to:

1. Advance the process to establish a Loss and Damage Finance Facility and commit to participating once established.
2. Determine that funding for this facility must be separate from and additional to other existing funding streams for development and humanitarian action.
3. Provide funding to operationalize the Santiago Network.
4. Make loss and damage a standing agenda item at future COPs

The success of COP27 rests on you. Any further delay of loss and damage action will be seen as a failure. The humanitarian and development communities will be watching and holding you accountable.

Photo: Children collect water to carry to their home in Uganda. Image by Charles Nambasi from Pixabay