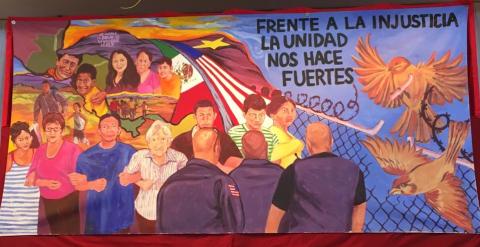 The Maryknoll Office for Global Concerns and missioners on the southern border released a statement on September 22, 2022, about the situation of some U.S. governors sending migrants to northern cities without planning for their welfare.

Since April, the governors of Texas and Arizona have arranged for buses to carry more than ten thousand asylum-seeking migrants in their states to the northern cities of Chicago, New York City and Washington, D.C. In recent days, the governor of Florida has joined them by arranging chartered flights to bring migrants to Massachusetts. All of this is being done with little or no communication or coordination with the leaders of the receiving cities and states or with the federal government, where immigration policies and procedures are to be set and managed. The Maryknoll Office for Global Concerns and missioners working on the southern border call for this shameful practice to end and for leaders at all levels of government to work together for an ethical approach to the management of migration that centers the dignity of the person, in this case, the vulnerable migrant.

“These migrants are being used as political pawns in immigration politics,” said Deirdre Griffin, SSJ, a member of the Maryknoll Lay Missioners who provides pro bono legal aid for migrants in El Paso, TX. “Being sent on a bus to a far-away city is fine if it is their final destination, but it is horrible if it is not. Their welfare is not being considered.”

“Though this political stunt is intended to sow fear and chaos, local groups at the final destinations are stepping up to provide a compassionate welcome,” said Susan Gunn, director of the Maryknoll Office for Global Concerns in Washington, D.C. “We urge our state and federal leaders to keep their focus on compassionate welcome as well.”

With Maryknoll missioners working to meet the needs of migrants on the southern border and in other locations around the world, we recognize the complexity of migration and the difficulty of responding to large groups of migrants in need.

“In a way, the buses and airplanes demonstrate that government funding can be used to resettle migrants,” said Coralis Salvador, a Maryknoll lay missioner serving migrants at a hospitality center in El Paso, TX. But the state funds currently being used were originally intended for other things. We need a coordinated, effective response.”

“At the same time, we need President Biden to address the root causes of migration forcing people to flee their home countries,” said Sr. Lelia Mattingly, MM, another Maryknoll missioner volunteering to help migrants at a hospitality center in El Paso, TX. “The majority of the migrants arriving now are from Venezuela, where broad U.S. sanctions have exacerbated economic problems, leaving ordinary people without enough food and medicine. Our sanctions may very well be one of the root causes in this migration crisis.”

“And we need Congress to act,” Gunn said. “For too long, Congress has failed to pass legislation to reform our broken immigration system. For millions of people in the United States, there is no pathway to citizenship and, as clearly demonstrated by the message of rejection communicated to the asylum-seekers sent off on buses and airplanes to places unknown to them, there is no functional public policy to welcome, protect, promote, and integrate our migrant brothers and sisters. We need positive, productive immigration reform now.”

“Look around, one of our strengths as a nation is our diversity!” said Fr. Raymond Finch, MM, former superior general of the Maryknoll Fathers and Brothers, currently serving as an administrator of a parish in the Diocese of El Paso, TX. “If we hope to continue building a future as a nation, we urgently need to build on that diversity by welcoming the stranger. On top of that it is also a Biblical imperative to welcome the stranger (Deut. 10:19).”