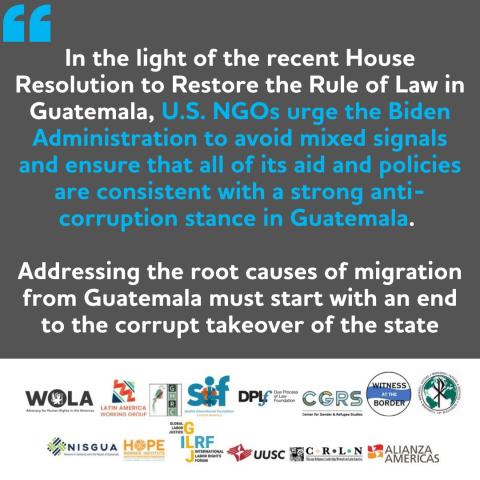 Maryknoll Office for Global Concerns joined 13 other organizations in welcoming the House Resolution aimed squarely at government corruption and the erosion of the rule of law in Guatemala. Read the statement in PDF form here.

U.S. civil society organizations welcome the House Resolution on Guatemala introduced on November 16, 2022 by Representatives Norma Torres, Albio Sires, Chuy Garcia, Jim McGovern, and Joaquin Castro. We are profoundly concerned with the takeover of Guatemala’s judicial system by corrupt actors, which has forced numerous honest judges and prosecutors to flee the country. We are equally concerned about the dramatic closure of civic space that affects Guatemalan Indigenous leaders, human rights defenders, and journalists, who face threats, attacks, false prosecutions, and are often forced into exile.

The resolution challenges the U.S. government to step up its efforts to show corrupt government officials and business elites in Guatemala that their systematic efforts to undermine the rule of law will have consequences. The resolution calls for ensuring that U.S. government-sponsored investment and international financial loans do not go to corrupt businesses and government entities, investigating and freezing the financial assets of corrupt individuals in the U.S. financial system, and suspending military assistance. We urge the Biden Administration to avoid mixed signals and ensure that all of its aid and policies are consistent with a strong anti-corruption stance. Addressing the root causes of migration from Guatemala must start with an end to the corrupt takeover of the state.

Like the members of Congress who are sponsoring this resolution, we commend the bravery, resilience, and resolve of the human rights defenders, Indigenous community leaders, independent journalists, honest judges and prosecutors, and pro-democracy and anti-corruption activists who risk their lives and livelihoods to bring a better future to Guatemalans.

Photo provided by WOLA at wola.org