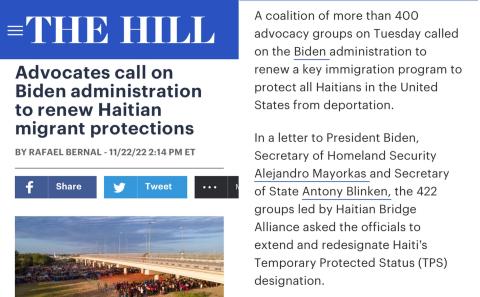 Maryknoll Office for Global Concerns joined 422 other organizations in calling on Pres. Biden to extend and redesignate Haiti for Temporary Protected Status. Haiti has experienced a nationwide lockdown for several weeks by armed groups. Civilians are being threatened, injured, sexually assaulted, killed, and homes are being looted and burned.

Re: Extend and Redesignate Haiti for Temporary Protected Status

As U.S. Ambassador Jeffrey DeLaurentis told the United Nations Security Council in September, “We all know that security in Haiti has worsened over the past year as criminal gangs continue to ravage parts of the country, leading to many killings and kidnappings. We are concerned with the significant deterioration in the independence and operational ability of the judiciary and the apparent evidence of widespread impunity reserved for elite members of the Haitian population.”

Armed groups, many controlled by members of the Haitian government, are terrorizing Haiti’s capital with kidnappings and other violent crimes, which have spilled into cities across the country. The country has experienced a nationwide lockdown for several weeks, with roads and businesses blocked by barricades erected by armed groups. Civilians are being threatened, injured, sexually assaulted, or killed, and homes are being looted and burned by gang violence. The UN estimates that 1.5 million people, or nearly 50 percent of the capital’s population, are directly affected by gang violence, and 4.5 million need humanitarian assistance. Since June 2021, more than 50,000 people have been displaced and forced to leave their homes due to violence.

A gang blockade at Haiti’s principal fuel terminal has crippled day-to-day activity throughout the country, paralyzing the economy, interrupting movement, and restricting essential supplies of food, medicine, and fuel for over 2 months. The inflation rate is 30 percent, the value of the Gourde dropped 32 percent from January to August 2022, and the price of food and gas has doubled, and in some cases increased ten-fold on the black market. According to a recent report by the UN, 4.7 million people in Haitian Nationals are facing acute hunger, including 19,000 in catastrophic famine conditions for the first time.

As the UN Security Council is considering an international intervention in Haiti to open aid corridors and resolve what the UN Secretary-General calls an “absolutely nightmarish situation,” the United States and Canada sent armored vehicles and other supplies to Haiti to help police fight powerful gangs. According to the U.S. and Canadian governments, the supplies sent on military aircraft are meant to assist Haiti's National Police “in their fight against criminal actors who are fomenting violence and disrupting the flow of critically-needed humanitarian assistance,” especially with the resurgence of cholera cases in the country. According to Haiti’s Health Ministry, as of November 5, there are 6,072 suspected cases of cholera and 121 deaths. With a healthcare system on a dramatic decline and the population unable to access the few hospitals and clinics that are open due to shortage of gas and gang violence, the Pan American Health Organization warned that the real number of cases is likely much higher than those reported.

All of the conditions leading to the Biden administration’s original TPS redesignation on May 22, 2021, the assassination of President Jovenel Moïse on July 7, 2021, the August 14, 2021 earthquake and subsequent tropical storm, and the deteriorating crises as described herein, make a safe return to Haiti completely impossible. On November 3, UN High Commissioner for Human Rights Volker Türk echoed this sentiment and warned, “In this context, it is clear that the systematic violations of rights in Haiti do not currently allow for the safe, dignified and sustainable return of Haitians to the country.” In response to these catastrophic events, we ask the Administration urgently consider the following actions:

Extend and redesignate TPS for Haiti

The current TPS designation for Haiti will expire on February 3, 2023. By statute, the Secretary of Homeland Security must decide by December 5, 2022, if conditions meet requirements that prevent safe return and pose a serious threat to the personal safety of nationals of that country.

Given the deteriorating security and humanitarian crises as described herein that present extraordinary and temporary conditions that make a safe return to Haiti impossible, the Administration should extend and redesignate Haiti for TPS. This will allow protection against removal and eligibility for work authorization to all eligible Haitians currently in the United States. Most Haitians who have entered the United States since the TPS eligibility date of July 29, 2021, crossed through as many as eleven countries on a dangerous and traumatic voyage in search of safety and security for their family. The current TPS recipients from Haiti in the United States, many of whom have been here for decades and have children who are U.S. citizens, have also become essential to our economy and our morale as a country.

For example, Rose Tilus, a Nurse Practitioner born in Haiti who has worked in nursing homes on the frontlines of the COVID-19 pandemic and has herself contracted COVID-19, is providing essential services to our nation during this pandemic. In her testimony before the Senate Judiciary Subcommittee on Immigration, Citizenship, and Border Security in May 2021, she stated, “In these difficult times, immigrants have shown their support and their devotion to this country. We have stood as frontline workers knowing that there was a possibility of death. Despite this, I live in constant fear of deportation and/or discontinuation of my Temporary Protected Status.”

We request that the Biden administration redesignate Haiti for TPS, provide a minimum 180-day registration period for both current TPS holders and new beneficiaries under redesignation, and lead a public education campaign in English and Haitian Creole to inform impacted community members.

The Department of Homeland Security (DHS) last redesignated TPS for Haiti on May 22, 2021, but the FRN, which enables prospective beneficiaries to apply, was issued on August 3, 2021. For this new designation, to avoid disruption of employment eligibility, U.S. Citizenship and Immigration Services (USCIS) must issue a new Federal Register Notice extending TPS work authorization for current TPS holders well before February 3, 2023. We urge for a swift publication of a Federal Register Notice (FRN) extending TPS for Haitians.

The delays in publishing the FRN have grave consequences for beneficiaries and their families since their TPS-related documents are only valid for a limited duration through certain expiration dates. Further, any delay in processing and approving TPS applications after the issuance of the FRN leaves thousands at risk of deportation and without authorization to work. These delays, which can last more than the period for which TPS is granted, can make the TPS designations meaningless. There are still tens of thousands of TPS applications pending for Haitian Nationals from the last redesignation. The top two countries with the highest number of pending applications in Q3 were Venezuela (135,452) and Haiti (90,943), which made up 90 percent of the total backlog.

Given this issue, it is important that the applications of those currently pending be transferred to the new redesignation date. This policy will enable these applicants to be released from the burden of paying an additional application fee as they continue to wait for a decision, but will also help USCIS appropriately close out cases without adding more applications to the backlog. In the case of South Sudan earlier this year, we were glad to see the issuance of the FRN on the same day as the designation. Similarly, the FRN for Venezuela in March 2021 and for Burma in September 2022 was published within one day of the TPS announcements. We hope that this time frame becomes the norm and not the exception.

Starting on January 13, 2010, the day after the devastating 7.0 earthquake, the U.S. government halted all deportations to Haiti for about eleven months. Removals were temporarily halted again in October 2016 after Hurricane Matthew’s devastation.13 Following the assassination of Jovenel Moïse in July 2021, 134 human rights, humanitarian, immigration, and women’s rights organizations wrote requesting your government halt deportation and expulsion flights. Again, following the 7.2 magnitude earthquake in August 2021, 334 organizations wrote another letter requesting the same.15 Even though the Haitian government has been unable to safely receive and reintegrate its citizens, there have been over 240 deportation and expulsion flights to Haiti since September 19, 2021. Most of these estimated 25,000 individuals removed to Haiti were blocked from seeking asylum and other protection by Title 42 policies. These removals severely undermine the Administration's promise to build a fairer and more inclusive immigration and asylum system for all. We request a halt of any deportations and expulsion flights to the already-overburdened country.

Furthermore, consistent with Sec. 241 of the Immigration and Nationality Act and the accompanying regulations at 8 CFR Sec. 241,16 Haitians with final removal orders should be released from immigration detention if they pose no threat to public safety or national security because there is no significant likelihood of their removal in the reasonably foreseeable future. Attorney General Garland restored the authority of immigration judges and the Board of Immigration Appeals to administratively close deportation proceedings nationwide. Immigration and Customs Enforcement (ICE) attorneys should be instructed to join motions to administratively close the cases of Haitians in removal proceedings since they cannot be safely removed under current conditions.

Thank you for considering these urgent requests to protect individuals like Rose Tilus, one of the thousands of Haitian TPS beneficiaries contributing to U.S. society. We strongly urge the Biden administration to (1) extend and redesignate Haiti for TPS, (2) swiftly release the Federal Register Notice, (3) provide a minimum 180-day registration period for both current TPS holders and new beneficiaries under redesignation, (4) release all Haitians currently in immigration detention centers, and (5) halt deportation and expulsion flights to Haiti. We look forward to working with you on this issue over the coming days and weeks.

See the signatories and citations here.