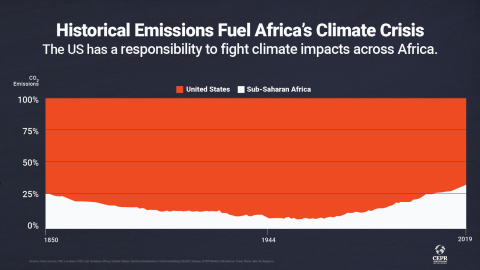 Maryknoll Office for Global Concerns joined a group of 60 civil society organizations in asking President Biden to commit to financing a loss and damage fund and to back a major new allocation of Special Drawing Rights to support countries confronting multiple, historic crises.

Read the letter as a PDF here.

We thank you for your decision to convene the 2022 U.S.-Africa Leaders Summit. It could not have come at a more urgent moment.

We are writing to urge you to elevate the significance of this occasion by taking dramatic action that will send a signal that the US sees and hears what is essential to solidify a wide range of important African partnerships, including with civil society. This can be accomplished by 1) supporting a new issuance of Special Drawing Rights at the International Monetary Fund and 2) announcing US financing for the loss and damage fund established at COP27. These twin actions would not only help provide urgently needed resources to bolster African and other developing economies and compensate for climate-related disasters, but would also demonstrate that the United States is shifting to be more responsive to the needs of developing economies, particularly in the context of growing geopolitical competition for influence on the continent. Such action will be remembered and impactful long after the photo opportunities have passed.

There is no doubt that the crises are staggering. But the potential to overcome is also great, with the right kind of strategic assistance delivered through burgeoning new partnerships that impact civil society. With the ongoing ravages of the COVID-19 pandemic; soaring food and energy costs driven by the war in Ukraine and the policies imposed in response; a mounting global debt crisis spurred by interest rate hikes in advanced economies; and an accelerating climate collapse felt in the form of droughts, wildfires, hurricanes, and floods — the world is in the midst of an unprecedented “poly-crisis,” the impacts of which are felt acutely across Africa.

Against this backdrop, it is all the more commendable that you have chosen to host the second ever U.S.-Africa Leaders Summit, demonstrating your firm commitment to diplomacy and engagement with a region that has too often been sidelined on the world stage. But meetings and discussions will be meaningful only if these initiatives are supported with the resources Africa needs to survive the combined, compounding global crises.

That is why we — organizations representing Africans, the African diaspora, and others concerned with the wellbeing of the African people — assure you that if you seize the opportunity of the coming Summit to commit to supporting a new issuance of at least $650 billion in Special Drawing Rights (SDRs) at the International Monetary Fund (IMF), as well as to financing the loss and damage fund recently agreed upon at COP27, it will resonate deeply.

The nations and peoples of Africa cannot afford delay. As we approach three years since the outbreak of COVID-19, less than one third of Africa’s population has received even a single vaccination dose. The IMF reports that economic growth in Africa has slowed “sharply” in 2022, as “a worldwide slowdown, tighter global financial conditions, and a dramatic pickup in global inflation spill into a region already wearied by an ongoing series of shocks.” As a result “public debt and inflation are at levels not seen in decades,” and 60 per cent of Africa’s low-income countries are in or at high risk of debt distress. An estimated 58 million Africans will fall into extreme poverty this year. One fifth of Sub-Saharan Africans face chronic hunger — double the world average. And on top of it all, despite having contributed the least of any continent to historical greenhouse gas emissions, Africa remains the most vulnerable to the impacts of climate change; 19 million Africans have been affected by extreme weather events in 2022 alone, from cyclones to wildfires, flooding to drought.

Against such challenges, last year’s issuance of $650 billion in SDRs provided a lifeline. One year after the issuance, over 100 low- and middle-income countries around the world had made use of their SDRs, including to import vaccines and other necessities, to pay back debts owed to the IMF, and to avoid debt and balance of payment crises. African countries used SDRs more than any other region, both by number of countries and take-up rate, with 47 of 54 African nations having used some or all of their allocation. But compared to the scale of the crisis, last year’s issuance was not enough even then — and now, our challenges have deepened.

That is why African leaders, such as African Union Chair Macky Sall, and finance ministers from across the continent have repeatedly called for a new SDR issuance of at least the same size as last year’s. In doing so, they echo the calls of the UN Global Crisis Response Group on Food, Energy, and Finance; dozens of US lawmakers; nearly 150 civil society organizations including Oxfam International, the AFL-CIO, Partners In Health, the International Trade Union Confederation, the International Chamber of Commerce, Global Call to Action Against Poverty Africa; and many more. We urge you to heed their calls.

While a new SDR issuance is urgently needed, and would help provide short-term resources for climate mitigation and adaptation, among other needs, additional action is direly needed to help compensate African and other developing countries for the harms caused by a climate crisis for which they bear little responsibility. That is why we were heartened to learn of the agreement reached at COP27 in Egypt — often referred to as “Africa’s COP” — to establish a new loss and damage fund. This agreement is a necessary and laudable step forward.

But, in the words of Power Shift Africa executive director Mohamed Adow, “What we have is an empty bucket. Now, we need to fill it, so that support can flow to the most impacted people who are suffering right now at the hands of the climate crisis.” In short, the loss and damage fund is only as good as the commitments made to it. While nations like Germany and Belgium have made small, symbolic commitments to loss and damage funding, no country has yet offered contributions commensurate with the existential magnitude of the climate crisis. We urge you to lead by example by making the United States the first to step into that role.

Engaging with African nations through diplomatic meetings like those which will take place at the coming U.S.-Africa summit is valuable. But the African people need more than words. As we have pointed out above, you have the opportunity to lead the way in providing Africa with substantial and appropriately-targeted support in the face of a nearly unprecedented global crisis. For the sake of the African continent and people, we urge you to take that opportunity.