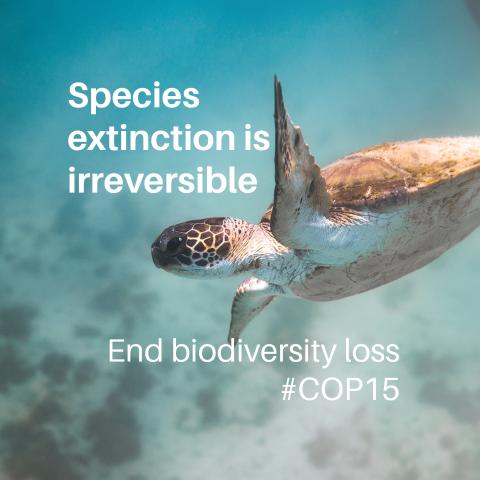 Maryknoll Office for Global Concerns joined 73 other organizations in asking the participating nations in the Convention on Biological Diversity, COP15, to take active steps to reverse biodiversity loss. Read the letter as PDF.

We represent 73 civil society organizations in calling on the signatory parties of the Convention on Biological Diversity to take concrete, active actions to stop and reverse biodiversity loss. This includes establishing, developing, and enforcing stringent regulations and laws to hold corporations and financial actors accountable for driving and worsening biodiversity loss. According to the Intergovernmental Science-Policy Platform on Biodiversity and Ecosystem Services (IPBES), only bold, transformative changes can adequately address biodiversity loss. State parties bear responsibility in initiating and implementing these transformative changes, which “By its very nature...can expect opposition from those with interests vested in the status quo”. The Fifteenth meeting of the Conference of the Parties to the Convention on Biological Diversity (COP15) is a pivotal moment for transformative change. We call on state parties to hold corporations and financiers accountable for their biodiversity impacts, and to firmly push back against political, economic, and corporate forces and vested interests which support business as usual.

Recommendations for State Parties to Stop and Reverse Biodiversity Loss

If the world is to succeed in stopping the coming cascade of ecosystem collapses, state parties must ensure the strict regulation of corporations and financiers, in addition to foreign corporations and financiers which operate within their territory. This month's COP15 is a pivotal moment for countries to come together and agree on concrete plans to stop and reverse biodiversity loss. As state parties will meet to finalize the Post-2020 Global Biodiversity Framework, we urge governments to consider implementing the following recommendations.

To stop and reverse biodiversity loss, governments must have the courage and resolve to go beyond the status quo and implement transformative changes. We hope these recommendations can help guide state parties in doing so.