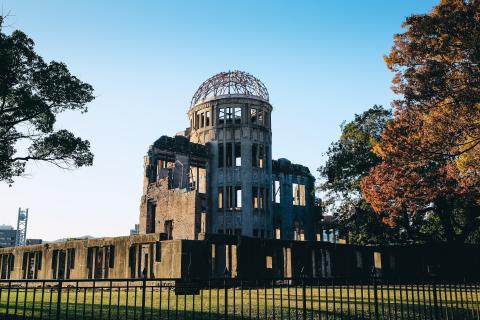 The Maryknoll Office for Global Concerns joined a coalition of faith-based organizations in sending the following letter to President Biden urging him to use the opportunity of the upcoming Nuclear Posture Review to fulfill U.S. commitments on reducing nuclear weapons.

As organizations who ground our work in our faith, we urge you to follow through on your previous commitments to reduce the role of nuclear weapons in U.S. national security policy. We believe it is both deeply immoral and highly irrational to threaten mass civilian casualties and risk planetary annihilation as a way of keeping Americans safe.

Faith leaders across a wide array of traditions, including Pope Francis, have spoken to the immorality of nuclear weapons possession and the existential threat of nuclear war.

“In a world where millions of children and families live in inhumane conditions, the money that is squandered and the fortunes made through the manufacture, upgrading, maintenance and sale of ever more destructive weapons are an affront crying out to heaven… The use of atomic energy for purposes of war is immoral,  as is the possession of atomic weapons.” - Pope Francis, 2019

Continuing to embrace nuclear weapons as an essential part of U.S. national security strategy contradicts your own recognition that “a nuclear war cannot be won and must never be fought.” Nuclear weapons are the antithesis of true security, creating a perpetual cycle of fear and distrust that makes diplomacy and international cooperation more difficult.

Especially as tensions between Russia and the United States rise over Ukraine, efforts to invest in diplomacy, peacebuilding, nuclear risk reduction, and arms control are far more effective ways of promoting human security than continued investment in weapons of mass destruction and war. As President Eisenhower so presciently proclaimed, “Every gun that is made, every warship launched, every rocket fired signifies, in the final sense, a theft from those who hunger and are not fed, those who are cold and are not clothed.”

Your upcoming Nuclear Posture Review is your opportunity to step back from the brink of war, advance arms control, and position the United States as a leader in the effort to create a more peaceful world. We urge you to seize this moment and move us closer to a world free from the existential threat of nuclear war.