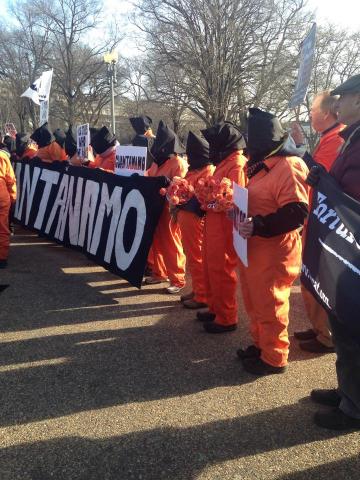 The Maryknoll Office for Global Concerns joined 28 other faith-based organizations in sending the following letter urging elected leaders to close the prison at Guantanamo Bay, Cuba. The letter was sent in commemoration of the 20th anniversary of the opening of the U.S. Naval Base Detention Center at Guantanamo.

As members of the American faith community, we call on you to close the prison at Guantanamo Bay, Cuba and to ensure that all of the people held there are either released, agree to a plea deal, or receive a fair trial in a federal court.

The prison at Guantanamo was opened as part of an effort to hold suspected terrorists outside of the protections of U.S. law.  This was wrong to begin with, however this immoral act was compounded by the decision to torture many of the prisoners.  In the fullness of time we now know that many of the people sent to Guantanamo were never involved in terrorism in the first place.

Even today, 20 years after the prison was opened, most of the prisoners have never been tried or convicted of any crime. Guilty or innocent the right to a trial is a bedrock American value, yet it has been denied to those at Guantanamo. Allowing the government to claim a war-based authority to hold people for decades without charge or trial, in a conflict that has no clear end-state or conditions for victory, and for which the government does not recognize clear geographic boundaries, is an extraordinary and dangerous expansion of governmental authority.

While the sustained immorality of holding people without trial ought to be reason enough to close the prison, it is also unreasonably expensive – costing more than half a billion dollars each year, or over $13 million per prisoner per year.  This is an utterly irrational figure to spend on a prison for only 39 people.