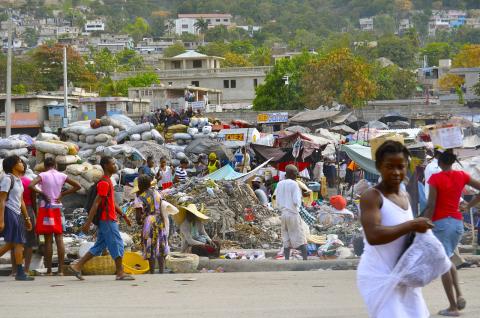 The Maryknoll Office for Global Concerns joined 55 other faith-based organizations in sending the following letter to the U.S. State Department urging them to support Haiti's process for free and fair elections.

You can also read the letter here.

As 56 faith-based organizations from a variety of religious and spiritual traditions, we call on the U.S. government to support Haitian citizens’ right to shape their own solutions to their nation’s crises. Our organizations address a wide range of issues, from immigration to foreign policy to broad faith-based social justice. We see deep connections between the treatment of Haitians seeking asylum at our borders and our government’s history and current practices in our relationship to Haiti. Therefore, we call on you to stop propping up Ariel Henry, and instead work to support the inclusive pathway towards restoring democracy laid out in the Montana-PEN Accord by a diverse cross-section of Haitian civil society and political leaders. We also call on the Biden administration to immediately cease mass deportations to Haiti, which only contribute to the current suffering and instability in a country vastly unprepared to receive and re-integrate thousands of people.

Haiti’s democracy of 31 years is in crisis. The U.S. government has doubled down on their support for Prime Minister Ariel Henry, both politically and financially, despite the fact that his power violates the Haitian Constitution. We are watching a repeat of the U.S. government’s past errors, including most recently the U.S.'s public support for former President Jovenel Moïse despite his refusal to hold elections, suspension of the legislature, and his increasingly authoritarian actions, such as drafting a new constitution to consolidate presidential powers and impunity. Under President Moïse, corruption ran rampant in both public and private sectors and Haiti’s economy spiraled into crisis, sparking violence and public protest.  Furthermore, Prime Minister Henry is under investigation for a possible role in planning President Moïse’s assassination and has impeded the investigation by firing the prosecutor who initially called him in for questioning and recommended he be indicted.

Henry was appointed as prime minister by Moïse shortly before Moïse’s assassination in July 2021. Since that time, chaos in the form of violence, kidnapping, rapes and murders through uncontrolled gang activity has risen across the nation. The dangers facing everyday Haitians has led to a massive flow of migration out of the country in search of safety and survival.

As faith-based organizations, we recognize the inherent worth and equality of all peoples, including their right to self-determination. The Commission for a Haitian Solution to the Crisis, which unifies a historically diverse range of Haitian society, has laid out a careful proposal for restoring free and fair elections, the Montana-PEN Accord, that offers a path to a new government that is representative of the people.

Over a two-year period, the Accord seeks to:

●  Organize a national conference with the aim of amending the 1987 constitution; and

●  Reform the electoral system and institutions to create the conditions for free and fair elections.

● Respect the fundamental rights of the Haitian people to shape solutions and incorporate this approach in any further U.S. government response;

● Start working to support a transition to a more stable and democratic Haiti by holding high-level, regular consultations with the Commission for a Haitian Solution to the Crisis and the PEN alliance to discuss the feasibility of their plans and path forward;

● Provide direct aid to civil society organizations to support COVID-19 vaccinations and response efforts in Haiti that address food and water insecurity, protection for women and girls, internally displaced/returnees/migrant populations in Haiti and human rights groups that are working to advocate for and protect Haiti’s political rights and democracy; and

● Urge international allies, particularly Canada, France and other European countries, to also follow the above recommendations.

Additionally, we call on you to halt deportations to Haiti and allow those that arrive at the border the opportunity to meaningfully apply for asylum, which requires ending the misuse of Title 42. Daniel Foote, U.S. Special Envoy to Haiti, resigned in protest over these mass expulsions, arguing in his resignation letter that, “Surging migration to our borders will only grow as we add to Haiti’s unacceptable misery.”

We believe that this moment provides the Biden administration with an opportunity to correct the historical wrongs in the U.S.’s approach to Haiti. Please take these steps to join us in honoring the determination, dignity, and resilience of Haitians both in Haiti and at our border.