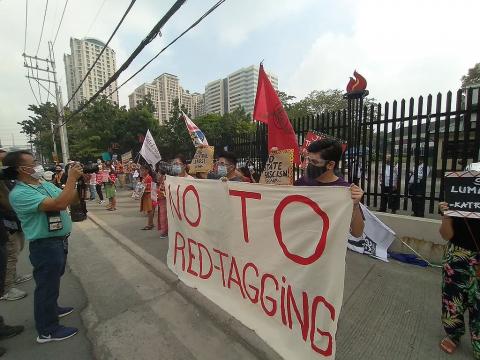 The Maryknoll Office for Global Concerns and other faith groups sent the following letter to Congress.

As denominations and faith-based organizations, many with longstanding partnerships on the ground in the Philippines, we urge you to support the Philippine Human Rights Act.

Bishops, priests, pastors, women religious, church workers, and laity have been threatened, intimidated, harassed, and murdered for speaking out against extrajudicial killings and the war on drugs. President Duterte has threatened to “kill useless Bishops” who speak out against  Duterte’s infamous Drug War, a war which has been widely condemned as a cruel and unjust killing spree without due process. The Armed Forces of the Philippines recently included the National Council of Churches in the Philippines (the largest Protestant church body in the country) in a list of organizations it described as “communist terrorist groups."

The targeting of dissent in the country is widespread; faith leaders, human rights defenders, journalists, indigenous people, workers, youth, women and children face constant attack. In a joint statement, three Catholic archbishops described the situation in the Philippines: “How may we describe the present social condition of our nation? It is like a valley of death with the killing of drug users and opponents, death by governance without vision, death by shameless corruption that seems to break all records.”

Gross human rights violations under the Duterte Administration are indeed well documented. Amnesty International has reported that killings of alleged drug users, which have taken the lives of at least 8,663 people, “persist in a climate of impunity” and that attacks on activists “have surged and grown more brazen.” A recent report from Investigate PH, an international independent investigation on the Philippines, concludes: “State security forces have killed 394 Filipino civilian political actors, broadly described as human rights defenders or advocates, in Duterte’s War on Dissent, up to the end of March 2021.” The report further notes, “officials from the President down” have made statements “to vilify, isolate, intimidate and eventually to either arrest or arbitrarily kill the unarmed civilian targets.”

While some have argued that U.S. aid is needed to defend against China, U.S. military assistance to the army and police does not serve to defend the Philippines against the Chinese intrusions in the West Philippine Sea under Philippine jurisdiction. Instead, it is being turned against the most vulnerable and marginalized among the country’s population.

We earnestly ask you to join us in advocating for the rights of the most exploited and oppressed in the Philippines and to co-sponsor the Philippine Human Rights Act.