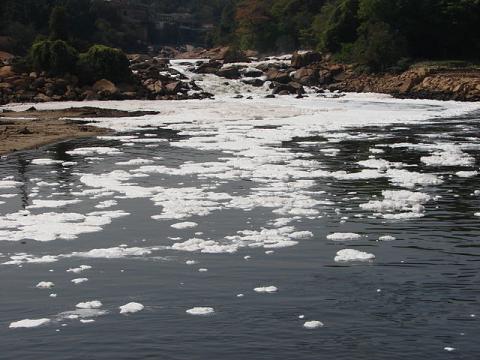 Fr. Dennis Moorman, MM, who serves in Brazil, wrote the following reflection which was published in A Maryknoll Liturgical Year: Reflections on the Readings for Year B, available from Orbis Books.

One weekend while at language school in Brasília, my host family asked me to join them for a visit to a beautiful, natural area on the outskirts of the city. I enthusiastically responded to the invitation, eager for renewal after having spent many long hours studying Portuguese. We hiked through what appeared to be a paradise in the countryside, finally arriving at a river where a sign had been posted, which read: “Warning: No swimming! No fishing! No drinking! Water is polluted and a health danger!” When I asked my host father about this, he told me that a multinational company that produced soft drinks had dumped chemical waste into the river and had essentially killed the waterway and everything living in it. Upon hearing this, I felt a deep sense of sadness and an overwhelming anger. After some time of prayer and meditation on this experience, I promised to myself that I would never drink another soft drink in protest. This experience changed my perspective on the world and motivated me to commit myself to being an advocate on behalf of the natural world.

Today’s scripture passages speak of “a time of anguish, such as has never occurred since nations first came into existence” (Daniel 12:1) and a time when “the sun will be darkened, and the moon will not give its light, and the stars will be falling from heaven, and the powers in the heavens will be shaken.” (Mark 13:24) We are currently living in an age of great distress where the very existence of life on this planet is at risk through human destruction of the natural world. The late “geologian” and Passionist priest Fr. Thomas Berry, who died in 2009, spent much of his life warning that commercial values are threatening life on our planet. He authored Twelve principles for understanding the universe and the role of the human in the universe process, the first of which states: “The universe, the solar system, and planet earth in themselves and in their evolutionary emergence constitute for the human community the primary revelation of that ultimate mystery whence all things emerge into being.”

Berry believed that the great tragedy of the loss of so many different species as a result of environmental destruction was that we are also losing manifestations of the Divine Creator, which are in and of themselves sacramental. This belief is based on the principle that the beauty and order of creation is also a manifestation of its Creator. Jesus himself often used examples from the natural world to speak of the mystery of God. In today’s Gospel, he uses the image of the fig tree as a parable that speaks of God’s action in the world in the face of great distress.

The apocalyptic images of Earth’s destruction that we hear in today’s passage from the gospel of Mark specifically refer to the profaning of the Jewish Temple by the Roman imperial powers as being a sign of imminent destruction, which would usher in an intervention from a messianic figure, who would bring about liberation, healing and reconciliation. As Christians, we understand that messianic figure to be Jesus the Christ, who through his commitment to God’s reign (manifested in his life, suffering, death and resurrection), brought the world to the threshold of this reality. We, too, as committed Christians are called to emulate Christ who offered his life in sacrifice for the healing of the world and the liberation of all those held in bondage, including all of creation.

As committed Christians, we are compelled to ask ourselves: “How would Jesus respond today to the crisis of climate change? Or, how would Jesus respond to those who, motivated out of greed and driven by profit, are wreaking havoc on the natural world?” We might also ask ourselves: “What can I do to change my lifestyle and live more simply, so that others may simply live? Or, how can I make a difference by speaking out and acting on behalf of the natural world?” The book of Daniel (12:2-3) gives us a vision of what we might expect at the end times as a result: “Many of those who sleep in the dust of the earth shall awake, some to everlasting life, and some to shame and everlasting contempt. Those who are wise shall shine like the brightness of the sky, and those who lead many to righteousness, like the stars forever and ever.”