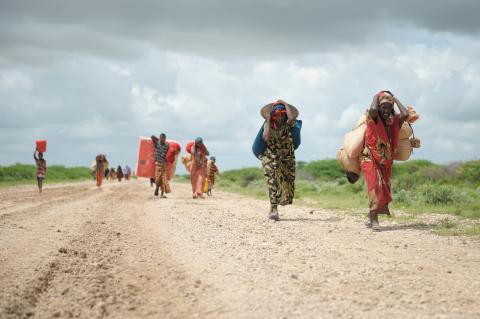 Fr. Wayman Deasy, MM, who served in Tanzania, wrote the following reflection which was published in A Maryknoll Liturgical Year: Reflections on the Readings for Year B, available from Orbis Books.

Today’s readings present us with several people from whom there are lessons to be learned. First, we encounter Elijah, a towering figure in the history of Israel, a prophet so revered that he was expected to return in advance of the Messiah’s coming. During Christ’s life people wondered if John the Baptizer or Jesus himself might be Elijah. It was Elijah together with Moses whom the disciple saw with Jesus on the Transfiguration Mount. Yet despite Elijah’s greatness we see him on the run because he dared to challenge King Ahab and Jezebel over the worship of false gods. He arrives in Zarephath, where he is a foreigner. He is humbled to the point that he must ask for help from a woman and a gentile at that. Carrying out his mission of speaking truth to power has not been easy, but he has persevered.

The widow Elijah calls upon for help is gathering wood. Those who have worked in Tanzania are familiar with women going out in search of wood each day and carrying back the bundle on their heads. It’s hard work. Likewise women daily go great distances to find water for the home and carry the heavy buckets balanced on their heads. We can imagine in the time of drought and famine how much effort has gone into fulfilling Elijah’s request for water. He then adds a request for food, when there is little for the widow and her son to eat. Elijah’s status in his own land means nothing to the widow. Still, the sense of hospitality and welcoming the stranger and alien leads the woman to provide the prophet with water and her food. Again, those of us who have sought shelter in a thatch roofed home during a storm in Tanzania have received similar hospitality. Even though we are strangers the family invites us to share the family meal despite their own need. Contrast this with the attitude in our own country toward the stranger who speaks a different language or dresses in a different fashion, the alien, the undocumented.

In the gospel we meet the scribes, the lawyers who interpret the law. Jesus often speaks out about the hypocrisy of the religious leaders and these interpreters of the law. They exploit the poor and the oppressed – the outcasts on the margin of society – but find the loopholes that favor the wealthy and powerful. They sit in prominent seats in the synagogue and make a great show of their generosity to the temple, while at the same time turning the temple into a place of commerce. Of course, in our own society we don’t have to look far to see the indifference of lawmakers to the poor, while they are lavish in assisting the rich and powerful. They worry about cuts in the military budget but think nothing of cutting aid to the poor and unemployed.

The scribes probably did not even notice the widow who with great humility makes her small offering. But Jesus, who welcomed the outcasts whom the scribes rejected as sinners, noticed. There is a stark contrast between the scribes’ phony piety and show of generosity and the widow who comes to worship and not to be seen.

All of these individuals offer us a chance to consider our own lives and attitudes, especially as we prepare for a new liturgical year in three weeks’ time.

Elijah’s mission was to be a prophet, and he was faithful to his calling. Still, he was called upon to suffer. He had to flee for his life. He was humbled and had to ask for assistance from an unlikely source, a gentile widow. We have a mission in life as well. We try to be faithful to what God has called us to do, but we are still subject to suffering and pain, to taking up our cross daily and following Christ. Are we reluctant to acknowledge our helplessness and pain and seek counsel and help?

The widow in Zarephath challenges us to consider our attitude toward aliens, the stranger, the undocumented in our land. Do we feel resentment that they are in “our” land? Do we view them as taking our jobs or having a free ride? Are we uncomfortable when they come to “our” church and use a different language and musical instruments? Or do we seek ways to welcome them so that they see this land and church as their own?

What do the arrogance and indifference to those who are marginalized teach us? Do we favor the privileged and curry their favor while ignoring those less favored? Worse yet, do we actually despise the poor and weak ones of society because they haven’t pulled themselves up by their boot straps as we did? How can we join with others to overcome these attitudes in our lawmakers who seem so indifferent to the pain of the weakest in society?

While the scribes may not have seen much in the widow making her small offering, Jesus did. He saw the true worth of her gift compared to those of the proud and vain scribes. What of ourselves? Do we fail to see the goodness in the marginalized who are often ignored or even despised? How can we speak for those who are poor and weak as Christ did?

Let us take the words of the psalmist as our guide:

The Lord “executes justice for the oppressed…
The Lord lifts up those who are bowed down;
…The Lord watches over the strangers;
he upholds the orphan and the widow…”