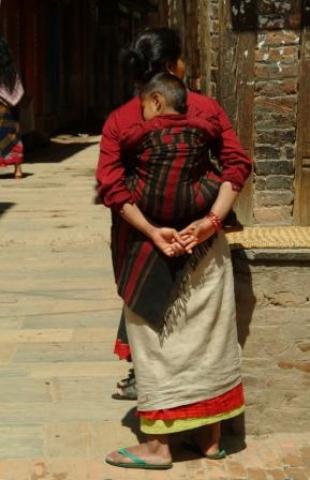 Sr. Janet Hockman, MM, reflects on the interaction between Jesus and Zacchaeus and the power of inviting others in.

The story of Zacchaeus is quite familiar to us. There are several renditions in graphics and song. It is easily embraced by children who can eagerly act it out. And here it is again for us to reflect on.

The gospel story says Jesus reached Jericho and intended to pass through the town. Was there a buzz in the crowd because Zacchaeus, with his known reputation, also made an appearance? Were watchful glances already shifting between Jesus and Zacchaeus?

The sycamore tree is pivotal in the story of Zacchaeus. The tree accommodated the physical reality of Zacchaeus.  It was the means of channeling and seeing beyond with curiosity and hope. It was a place of confounding others in the crowd whose expectations of Jesus did not include a diversion to the home of a ‘sinner.’  And the tree hosts the beginning of another chapter in the life of Zacchaeus.

Something surely happened in the mutual glance and movement between Jesus looking up and Zacchaeus coming down. Jesus came to seek out and save. Did Zacchaeus have any clue?

There’s a shift in the story from the gathered crowd to the inner place of Zacchaeus’s home, and then a further shift to inner heart space. What joyful receptivity! Was Zacchaeus happy for the invitation to re-turn, already open to changing his ways? Was he already disposed to generosity? It’s about more than money! What about all the family and extended family who gathered in at his house? There is great potential in witnessing. I must stay at your house, Jesus told Zacchaeus.  Experiences can last a lifetime.

Imagine the potential for life-changing relationships, starting with being seen!

I think back to just a few days after the king of Nepal was overthrown. Discord was everywhere in the country.  I was out in the village of Godavari where I lived and ministered. With all the upheaval and violence of the recent weeks, I wanted to get into Kathmandu for connection with the two other Maryknoll Sisters, to see if they were okay and to have some simple Easter celebration with them. Fr. Cap, SJ, also wanted to go to Kathmandu. The only way to get there was to walk and he knew the way. He also knew everyone along the way. It was not possible to pass a house without greetings; it was not possible to greet without being offered tea; it was not possible to have tea without waiting for the kettle to be boiled and conversation to flow. I do not know the measured distance from Godavari to Kathmandu via the villages. Some things are just not measured in miles or even in time but by what happened along the way.

Our return was just a day and a half later, by a different route, with thicker socks and greater trust in Fr. Cap. Many cups of tea later we rounded a bend and faced a sloping field with dozens of people scattered about working. This was a surprise even to Cap. We stopped and watched, not really grasping what was happening. A man approached, likely as curious of us as we were of the scene. He offered a spot to sit, gave us a brushed off piece of cardboard and some water to drink. Attempts were made with mutually unfamiliar languages and gestures. The man had heard of Father Cap but had never met him; what a broad smile grew in the realization. It was the potato harvest for the people of a different district of Nepal. We could not leave. Potatoes would be boiled for us. It was time to simply take in and be humbled. Cap offered blessings for the people, for the land and the harvest. The silence of all was astounding. It was a holy moment.  We ate the first fruits. Fed in body and spirit, we continued on our way.

Who is it that we choose to see or not to see along our ways in these times? Who is wrongly pre-judged?  What expectations do we hold? Into whose environment would we refuse to go? Who do we fear and to whom are we a source of fear? Who is not welcome in my country, in home, in my heart? The pool of questions ripples out and on.

Remember surprising experiences you have had in being invited into the realm of another. Where have we been met by Jesus? And where have we met Jesus along the way?