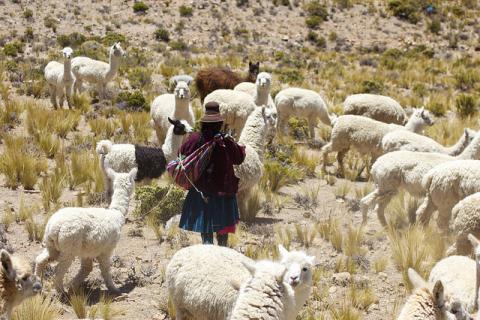 Fr. Mike Briggs, MM, is a missioner in Puno, Peru.

Today’s readings invite us to reflect on Jesus's mission and on polarization.

In the gospel, Matthew depicts Jesus initiating his mission. It is very interesting that John the Baptist has just been arrested; it shows that the context in which Jesus is starting out is one of persecution. We know that this is not going to end well for John the Baptist. And Jesus is proclaiming the same message as John. But Jesus, aware of these risks, feels impelled to share the good news. He proclaims: “Reform your lives! The Kingdom of Heaven is at hand.”

It is interesting that Jesus does not begin his ministry in Jerusalem or in the temple. Rather he is in Galilee, a town in the north considered remote. He is out on the margins, on the periphery. It is at the peripheries that Isaiah proclaimed, as we heard in the first reading, “the people in darkness will see a great light”.

At the periphery and in this context of persecution of prophets, Jesus proclaims the Kingdom of Heaven. Then, immediately, Jesus invites four fisherman, two sets of brothers, to join him. From the very beginning, Jesus does not act alone. Rather, he calls others to join him. The fisherman are so drawn to Jesus that they drop everything and two of them even leave their father to follow him. When we hear of Jesus with Peter, Andrew, James and John, it is always an opportunity to recall how we first experienced Jesus calling us or how we continue to find Jesus asking us to drop what we are doing and set out again to follow him.  Recently Pope Francis has reminded us that we are called not just to be disciples but missionary disciples. We are called to follow Jesus and to share in his project of mission.

In the letter of Paul to the Corinthians we find some of this first Christian community identifying with Paul, others with Apollos, others with Cephas (Peter) and others with Christ. Paul reminds them that it was not Paul who had been crucified for them, nor were they baptized in the name of Paul. In doing so, Paul is putting Christ in the center of our focus and of our faith.  In these times when it is easy to be divided by the many issues and events that whirl around us, Paul invites us to seek unity. He does not say this will be easy.

Writing in Puno, in the Andes Mountains of Peru, I have some good news to share. Being united might not be easy but it is not impossible. Indigenous peoples the world over have been showing us this. Here in Puno, the Aymara people have been living together for ages, making due in spite of their poverty and dealing with the tensions that close living brings. Tensions such as whose cow has gotten into my barley field.  And they have found ways to organize themselves and commit themselves to ongoing dialogue over key issues. They put a value on community and being united. Sure, for us who are not part of an indigenous culture, it is a challenge to attempt to build bridges, to celebrate common ground, common values and priorities. It takes effort at times to try to hear each other’s experiences and points of view. It calls us to move toward unity even as we realize this will be a process that takes patience and humility. But it is not impossible.

This Sunday the readings invite us to take up Jesus’s mission to promote God´s Kingdom and to renew our commitment to building unity.